Ferguson incident reveals excessive use of force by police 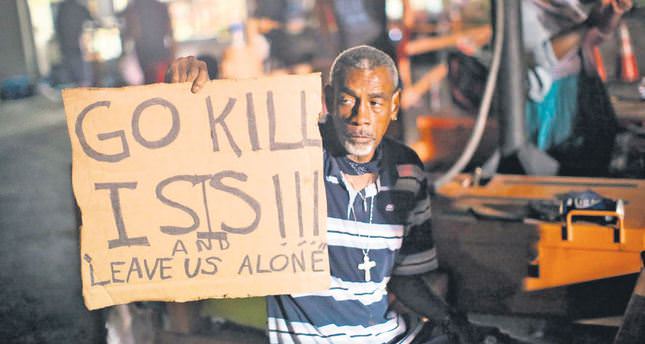 Relative calm has come to the streets of Ferguson after 10 days of violent clashes between protestors and police. Yet, the excessive use of force and civil rights violations by the Ferguson Police Department has remained a significant matter that is coming under increasing scrutiny in the U.S. and international media. An armed police officer pointed a semiautomatic assault rifle at a Ferguson protester, threatening to kill him late Tuesday night.

The St. Louis County Police Department announced that the police officer in question "has been relieved of duty and suspended indefinitely" over the incident while calling his actions "inappropriate." Before this incident took place, a Turkish correspondent, Bilgin Şaşmaz, working for the state-run Anadolu Agency (AA), was beaten by police while covering the recurring protests in Ferguson and detained for more than five hours in a cell on late Tuesday. Şaşmaz was at the scene of the protests, trying to record a police officer who was about to shoot a rubber bullet at one of the demonstrators. Şaşmaz spoke Tuesday via phone to AA headquarters in Ankara, Turkey. He also said that the police threatened to kill him if he did not stop taking photos of police shooting rubber bullets at protestors.

Apart from the AA correspondent, the arrest and tear-gassing of journalists during the demonstrations has drawn significant attention around the world as U.S police infringed on the freedom of the press. Many journalists have been kept away by the police or barred from entering the city ever since the violent clashes erupted. Wesley Lowery, a Washington Post political reporter and Ryan Reilly, a Huffington Post reporter were arrested by Ferguson police last week. After long hours of detention, they were released the same night that they had been taken into custody. The other journalists were hit and tear-gassed by the Ferguson police outfitted in SWAT gear, while covering the unrest.

As the criminal inquiry into the police shooting of Michael Brown begun on Wednesday, Attorney General Eric Holder arrived in Ferguson to assure the people of Ferguson about the investigation into the shooting death of Michael Brown amid fears that the case would not be investigated fairly. He also said that there is a growing mistrust towards U.S. police among the Afro-Americans as many have become the target because of the race issue. "Justice will be upheld in Michael Brown case," U.S. attorney general also said.

The death of an unarmed 18-year-old at the hands of police officers has raised questions about the excessive use of force of the Ferguson police department. The U.S. Justice Department would also conduct close investigations into the case. The latest incident in the U.S. city of Ferguson has been getting prominent media coverage due to the police's violent behavior toward demonstrators and journalists.

A 12-person grand jury convened to hear evidence Wednesday to determine whether charges will be laid against Darren Wilson, the police officer who fired six bullets into Michael Brown on Aug. 9. The jury process is expected to finish by the middle of October, the county prosecutor told ABC news.

After heavy clashes on Monday resulted in at least 78 people being arrested, only six protestors were arrested on Thursday, signaling that the protests have turned calmer. However, the tension has not yet been settled as many fear that the latest police shooting would likely exacerbate the ongoing turmoil in the violence-hit Ferguson.
Last Update: Aug 22, 2014 10:15 am
RELATED TOPICS