Ferguson police in US suspended over online rants 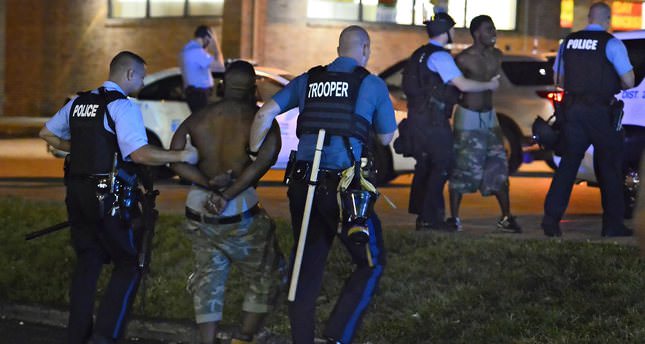 by AA Aug 23, 2014 12:00 am
Two officers involved in policing protests in the troubled American town of Ferguson have been suspended from duty for online comments.

One officer made apparently racist remarks in a video posted on YouTube while another said anyone protesting should be treated like "a rabid dog."

Dan Page, a 35-year veteran of the St Louis County Police Department, was filmed at a meeting in April.

"I am a killer, I've killed a lot. And if I need to, I'll kill a whole bunch more," Page said in an apparent reference to his military background. "If you don't want to get killed, don't show up in front of me."

In the hour-long video, he railed against Muslims, gay people and black people-referring to "black perverts"-and questioned President Barack Obama's right to govern.

The video was made public by Don Lemon, the CNN journalist who was pushed and threatened by Page as he reported events surrounding the killing of black teenager Michael Brown in Ferguson, Missouri.

"All men are created equal. That does not mean affirmative action," Page remarked in the video. He also referred to Obama as the "undocumented president" from Kenya.

An officer from Glendale Police Department, Matthew Pappert, was suspended for a Facebook posting. "These protesters should have been put down like a rabid dog the first night," he wrote.

Glendale Police Chief Jeffrey Beaton said: "I would not expect this from any of my police officers, that's why we immediately started looking on this matter."

Journalists have identified Pappert as an officer who threatened the media during the unrest in Ferguson.

The police officer who was allegedly involved in manhandling and threatening Anadolu Agency journalist Bilgin Saşmaz was also suspended this week.

Fourteen journalists have been arrested while covering the protests in Ferguson. Global media rights groups have condemned the mistreatment of Saşmaz.