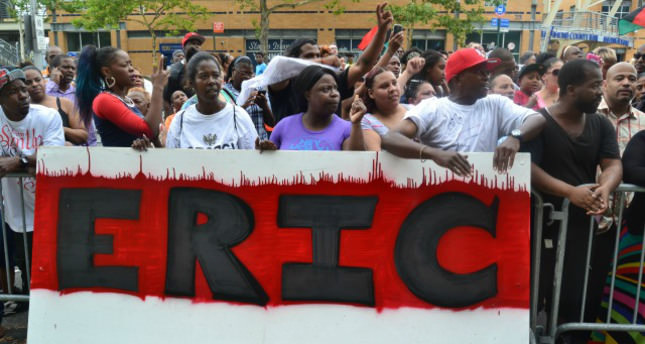 by Associated Press
Aug 23, 2014 12:00 am
Marchers are set to protest the death of an unarmed black man who was placed in a chokehold by a white New York police officer, the latest high-profile call to change relations between police and communities of color in the wake of recent violence.

The march, which is being led Saturday by the Rev. Al Sharpton's National Action Network, will begin at the street where 43-year-old Eric Garner was placed in the fatal chokehold and culminate with a rally at the office of Staten Island District Attorney Daniel Donovan, who this week sent the case to a grand jury.

Sharpton has repeatedly called Garner's death — and the shooting death of 18-year-old Michael Brown by police in Ferguson, Missouri — a "defining moment" for the very nature of policing. Members of both Garner's and Brown's family are expected to join the "We Will Not Go Back" march.

But Sharpton has toned down some of the defiant rhetoric that marked his earlier speeches after Garner's death last month, which included a fiery lecture of Mayor Bill de Blasio and Police Commissioner William Bratton within the walls of City Hall.

First, he backed off his initial plan to hold the march over the one bridge that connects Staten Island to the rest of New York City, which would have snarled traffic. He also downsized the number of people he expects to attend, dismissing initial estimates that 15,000 people may march and this week saying that he expected it would draw 3,000 to 5,000.

And this week, at a summit of police and religious leaders convened by de Blasio and Cardinal Timothy Dolan, he drew a sharp contrast between the violent clashes between police and protesters in Ferguson with the peaceful protests that have marked Garner's death.

"Yes, the problems still exist, but they will not be solved with rancor and hostility," Sharpton said. "We must show the world that we are mature enough to allow its citizenry to question those in authority, but respect them at the same time."

Garner, an asthmatic father of six, was unarmed when he was stopped by police on July 17 for allegedly selling loose cigarettes. In a confrontation captured on cell phone video, Garner, who is black, was placed in a chokehold — an illegal tactic — by a white officer and can be heard screaming "I can't breathe!" as he was forced to the ground.

He died a short time later. The city medical examiner ruled the death a homicide and two NYPD officers have been reassigned during the investigation.

Sharpton and other activists have demanded that Donovan bring criminal charges against the officers and have called for the federal investigators to step in. But the Justice Department has signaled that it will likely wait for the local probe to conclude before making a decision.

Saturday's half-mile long route winds itself through a heavily-minority neighborhood, one of several in the nation's largest city where residents have said they feel unfairly targeted by police for suspicion of crime and enforcement of low-level offenses.

Officials have said that there will be a visible security presence at the march — which will be attended by former Gov. David Paterson and City Council Speaker Melissa Mark-Viverito — but will not deploy NYPD helicopters or use the confrontational tactics that have marked the clashes between police and protesters in Ferguson. Some business owners have decided to close up shop during the march for fear of violence or looting.
Last Update: Aug 24, 2014 4:12 pm