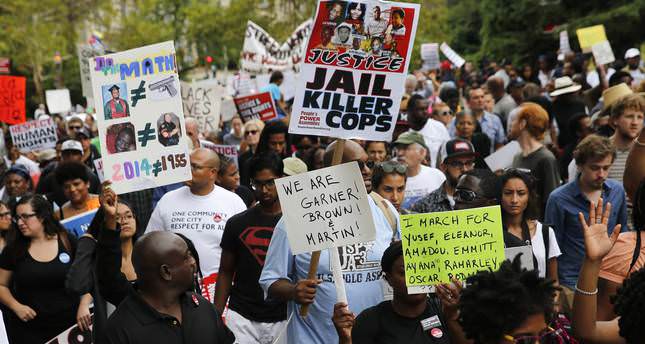 by Associated Press
Aug 23, 2014 12:00 am
Thousands of people expressing grief, anger and hope for a better future marched peacefully through Staten Island on Saturday to protest the chokehold death of an unarmed black man by a white police officer.

The afternoon rally and march was led by the Rev. Al Sharpton and relatives of Eric Garner, who died July 17 after a New York Police Department officer took him to the ground with a banned tactic in a confrontation captured on video.

The marchers started near a makeshift memorial of flowers, signs and candles set up where Garner was wrestled down and handcuffed. They carried a banner: "We Will Not Go Back, March for Justice."

Police estimated at least 2,500 people had taken to the streets. The crowd included representatives of the United Federation of Teachers and members of the Society of Friends, also known as Quakers. City Council Speaker Melissa Mark-Viverito and Democratic gubernatorial candidate Zephyr Teachout marched, too.

Diana Smith-Baker, a white Manhattan resident and Quaker, said it was important for people of all races and religions to bring attention to "the inequities toward black people and Hispanic people by the police department."

Earlier, Sharpton warned about 100 marchers at a Staten Island church to remain nonviolent or go home. He also repeated his call for a federal takeover of the criminal probe into the death of the 43-year-old Garner, an asthmatic father of six who was stopped for selling loose cigarettes.

The Rev. Herbert Daughtry told the church crowd: "This is a Birmingham, Alabama, moment!" He asked for anyone who had been harassed, humiliated or disrespected by police to stand, and almost everyone did.

Signs were plentiful. Most popular were "Hands up, don't shoot," which emerged during protests in Missouri over the police killing of unarmed black teen Michael Brown, and "I can't breathe," Garner's last words.

Garner's widow, Esaw, also urged a peaceful march, saying she is now too afraid to let her sons go outdoors. She asked marchers to "get justice" for her husband.

Protesters walked alongside dozens of police officers in parade gear, including polo shirts and pants. There were also officers in formal blue uniforms, but none had riot gear.

Tamika Mapp, 38, a black Army veteran from Harlem, said she participated "because I don't want my son to have to do this when he's 38."

The rally with people chanting "No justice, no peace" proceeded past the office of Staten Island District Attorney Daniel Donovan, who this week sent the case to a grand jury, and finished at a stage set up next to the Staten Island Yankees minor league ballpark.

Sharpton told the crowd most police officers do their jobs but added: "We are here to deal with the rotten apples."

Sharpton has repeatedly called Garner's death — and the shooting death of the 18-year-old Brown by police in Ferguson, Missouri — a "defining moment" for policing nationwide.

Garner's death was ruled a homicide. Two NYPD officers have been reassigned during the investigation.

So far, the U.S. Justice Department has signaled it likely will wait for the local probe to conclude before deciding whether to launch a formal civil rights investigation.
Last Update: Aug 24, 2014 9:42 am