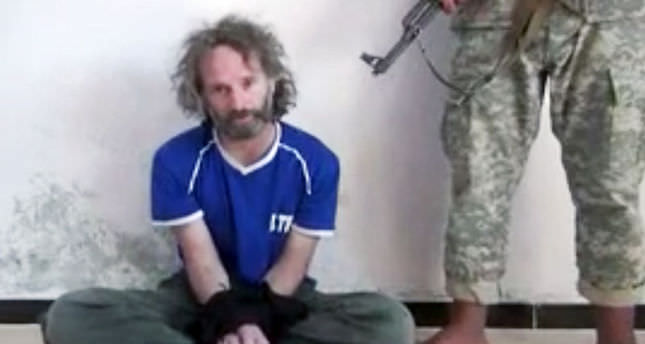 by Daily Sabah Aug 25, 2014 12:00 am
Peter Theo Curtis, a freelance American journalist held captive for nearly two years in Syria by the Nusra Front – an al-Qaida affiliated militant group – was released on Sunday. His unexpected liberation came after extensive mediation between Qatar, the Gulf Emirates and the U.S.

U.S. Secretary of State John Kerry, in a press statement given on Sunday, confirmed Curtis' return to his home country, saying, "For two years, this young American has been separated from his family. Finally, he is returning home."

The journalist was reportedly handed over to U.N. peacekeepers in the village of Al Rafid in Lebanon, and then transferred to U.S. government representatives. "Particularly after a week marked by unspeakable tragedy, we are all relieved and grateful knowing that Theo Curtis is coming home after so much time held in the clutches of Jabhat al-Nusrah," Kerry said.

The release of Curtis came after the recent murder of American journalist James Foley – missing in Syria since November 2012 – by radical ISIS militants. Referring to Foley's killing, it was also stated that the U.S. "will continue to work tirelessly on behalf of all Americans who are held overseas so that they can be reunited with their families," as many journalist travelling to any Middle Eastern country faces greater risk of being captured by the militants and "become victims of brutal forces unleashed and abetted by the conflict."

International press freedom group Reporters Without Borders also stated that some 50 Syrian professional or citizen journalists were being held hostage either in Syria or Iraq. Considering Curtis's release, the New York-based Committee to Protect Journalists stated that they have been "deeply concerned for the safety of all the journalists who remain hostages in Syria," said Sherif Mansour, the Middle East and North Africa program coordinator for the group, reported by DPA.