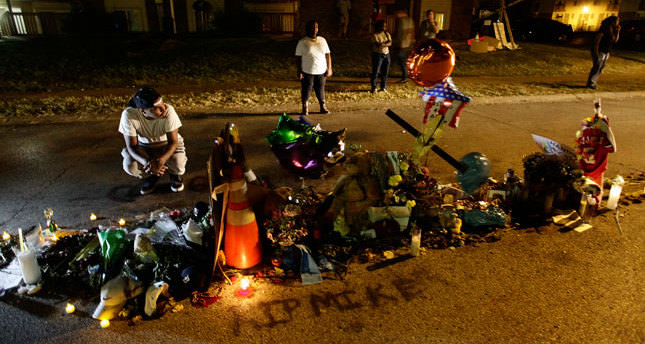 Ferguson streets are relatively silent after the White House promised to investigate the killing of a black man by the police. However, peaceful protests continued to be held over the weekend

Two weeks after a white policeman shot and killed an unarmed black teenager in Ferguson, Missouri, smaller, quieter street protests prevailed at the weekend, while supporters of the officer rallied separately and called the shooting justified. Saturday marked the fourth night of relative calm for the St. Louis suburb following nightly spasms of unrest since Michael Brown, 18, was shot by Ferguson police officer Darren Wilson on Aug. 9. The area's main street was open to traffic and police presence was down sharply from just 24 hours earlier. Shortly before midnight, police arrested three people, leading to some tension that soon abated. For well over a week, authorities had arrested dozens nightly in clashes with demonstrators, drawing attention to often-troubled U.S. race relations.

Police were criticized for mass arrests and use of heavyhanded tactics and military gear, which was widely seen as stoking an already volatile situation. President Barack Obama has ordered a review of the distribution of military hardware to state and local police, a senior administration official said on Saturday. The White House also announced that three presidential aides would attend Brown's funeral on Monday. Early on Saturday about 70 people marked the two weeks since Brown's death at a makeshift memorial where he was shot.

Tracey Stewart-Parks, 52, who works for a health care firm, carried a sign that read "Mike Brown was someone's son - I walk for their son." She said something similar could have happened to any of her four sons. "All of them have had to learn the rules of driving black," she said. "This has been a long time coming ... It's time to rip the Band-Aid off this old wound. It's time for change." As the crow flies the two rallies held Saturday afternoon over the fatal shooting of an unarmed black teen by a white policeman were about 10 miles (16 km) apart, but the racial divide that separated them made that distance seem infinitely greater. In Ferguson, a crowd of around 500 people marched under a blistering Missouri August sun over the weekend to protest the killing of 18-year-old Michael Brown two weeks ago by Darren Wilson, on a route that took them almost to within sight of where Brown died. Meanwhile, supporters gathered at Barney's Sports Pub well south to rally for Wilson, the officer who shot Brown dead. Some 70 people attended at the rally's peak in the dark, low-ceiling bar with dart boards, pool table and an old cigarette machine. The stark difference between the two events was their racial composition.

The crowd at Barney's, which is frequented by police officers and firemen, was entirely white, while the marchers in Ferguson were mostly black. The killing of Brown on Aug. 9 has sparked sometimes violent protests, laying bare long-lingering racial tensions in the United States and prompting international condemnation of the clashes between police and demonstrators. On Saturday the differences that separate some in the black and white communities and their current moods were on full display.The rally at Barney's was peaceful, but participants expressed anger at the way Officer Wilson and the police force have been treated since Brown's death. This is a community that has been on the defensive after Brown's death and one that on Saturday sought to make its voice heard.

Many participants would not give their full names, citing a fear of death threats. Others expressed anger at media coverage of the fatal shooting. "An officer that has abided by the law has been tried and found guilty without the evidence," said Laura, 48, who carried a placard on the sidewalk in front of the bar that read, "It's not about black or white, it's about rule of law." Navy blue T-shirts were on sale to raise money for Wilson's family reading "Darren Wilson I stand by you." "We are here to support you, Officer Wilson, and we've got your back," said St. Louis resident Mark Rodebaugh whose wife's family owns the bar. "He has been vilified in the news but his story is coming out."

Although the rally up in Ferguson was mostly black, there were plenty of white protesters among the largely quiet and somber crowd. They included St. Louis County police chief Jon Belmar, who marched at the head of the rally alongside Ron Johnson, the black Highway Patrol officer who has been in charge of policing efforts here for over a week. Among the white protesters was Jennifer McCoy, a 48-year-old lawyer who lives in the St. Louis area and attended with her daughter Blair, 10. "The segregation in St. Louis has been a pressure cooker for so long I'm surprised that protests over a shooting haven't happened sooner," McCoy said. "So I'm here to show my support." The mood among the black participants varied. Nicki Taylor, 33, a nurse, was grim faced and determined. "I am tired of the injustice that is being inflicted on our young black men," she said. "I'm going to keep doing this until Officer Wilson goes to jail for the execution of a young unarmed black man."

But there were also those like Robbie Bailey, 47, who works for General Motors and spoke of a need for America to recognize its racial problems and police tactics but also said he was praying for Officer Wilson's family. "Both families are going through a really hard situation right now," he said. "We're talking about the entire system and America needs to acknowledge the problem so we can fix it," he added.