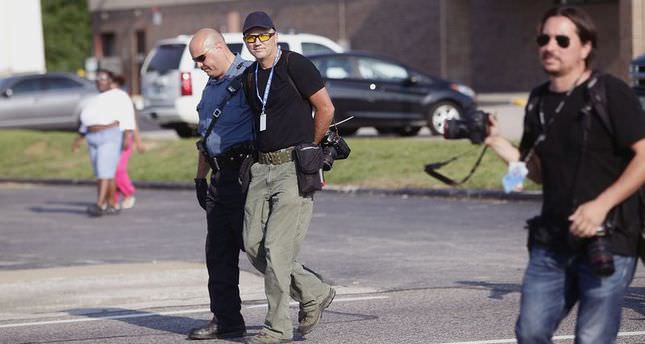 by AA Aug 25, 2014 12:00 am
As media attention remained fixed on the racial tumult in the St. Louis suburb of Ferguson, another story has unfolded behind the scenes-that of law enforcement's crackdown on those attempting to get the story out.

Anadolu Agency journalist Bilgin Şaşmaz was threatened, manhandled and detained for five hours while covering disturbances in Ferguson last Tuesday. A police officer has been suspended in relation to the incident.

A medical report says Şaşmaz went through psychological trauma while he was in detention. He has black and blue spots and bruises on his elbow and knee resulting from the arrest.

Şaşmaz is not alone. He is one of 17 journalists taken into police custody during the demonstrations, according to the Freedom of the Press Foundation.

Highway Patrol Captain Ron Johnson declined to comment specifically on Şaşmaz's case, but said the chaos of the protests made it difficult for police to assess who was really a journalist.

"When there's so many people out here, some journalists only have cell phones as their camera. And some are agitators -- I've picked up on that -- and saying they're journalists. We can't determine that when we're in the heat of trying to bring calm," he said in an interview with The Anadolu Agency.

St. Louis County Police Chief Sam Belmar defended the police actions, saying the number of journalists in the suburb was something that had not been seen in the area before.

"The media presence here is probably unprecedented for most of the law enforcement," he said. "It's been a challenge, but we've allowed the media to have their voice, too."

But Ryan Devereaux, a reporter with The Intercept, an online news organization, who was shot by police with what he believes was a rubber bullet before being taken into custody on the same day Sasmaz was detained, said the suppression was distressing.

"The incidents in Ferguson are certainly shameful when it comes to press freedoms," he said. "It's upsetting and disturbing to see journalists treated the way that they have been here on the American street."

"We have a First Amendment here, and it's supposed to mean something," he said. "I'm absolutely grateful for the press freedoms we have here, but they have to be protected."

The First Amendment of the U.S. Constitution prohibits the enactment of any laws curtailing freedom of the press.