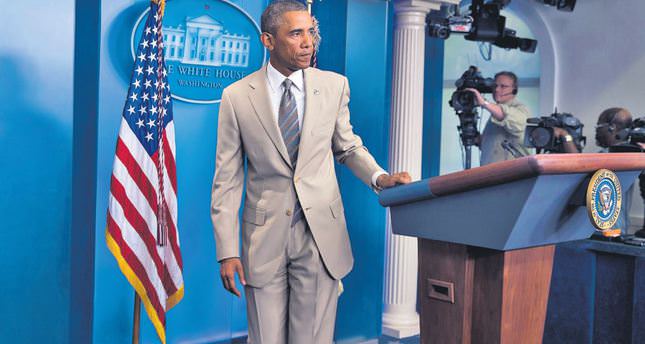 U.S. President Barack Obama has come under renewed criticism over his foreign policy from both Democratic and Republican lawmakers as he wrestled with crises in Iraq, Syria, Libya and Ukraine

Republican lawmakers on Sunday seized on Obama's comment earlier this week when he said, "We do not have a strategy yet" for confronting the Islamic State of Iraq and al-Sham (ISIS), saying it suggested indecisiveness. Also on Sunday, influential Democrats chimed in with their own critiques of Obama's foreign policy, chiding him for being "too cautious" on Syria, and urging him to do more to help Ukraine resist Russian advances. "I have learned one thing about this president, and that is he's very cautious. Maybe, in this instance, too cautious," Democrat Dianne Feinstein, chairman of the Senate Intelligence Committee, told US TV network NBC when asked about Obama's comments about dealing with ISIS fighters.

Representative Adam Smith, the top Democrat on the House Armed Services Committee, cautioned that any US action in Syria had to be carefully calibrated to avoid inadvertently supporting the regime of Bashar al-Assad. But he joined Republicans in urging Obama to provide more than just "non-lethal" aid to the Ukrainian government as it resisted Russian forces. "We should be more forceful when supporting the Ukrainian government," Smith told CBS TV network. "I think it's appropriate to up that aid to make them a more capable fighting force, to resist this incursion."
The critical comments came as the Obama administration faced myriad crises around the world, including a reported attack on an annex to the US embassy in Tripoli, Libya. In response to the criticism of Obama's comment on the lack of a strategy, White House officials said it reflected the fact that the Pentagon was still developing options for possible military action in Syria. US officials emphasized that the administration does have a broader strategy, and the military plan is only one element.

The lawmakers statements reflect growing concern about potential homeland security threats posed by hundreds of US, British and Canadian citizens who have trained to fight in Syria.

But Obama may still have trouble winning support from a deeply divided Congress for expanded military action against the ISIS. "His foreign policy is in absolute free-fall," said Representative Mike Rogers, who heads the House Intelligence Committee. "This 'don't do stupid stuff ' policy isn't working," Republican Senator John McCain said US action against ISIS would require more US special operations forces, more air controllers; more advisers to train the Iraqi military, which was near collapse; and other countries to partner with. But McCain said Obama was having trouble building a coalition to take action against ISIS fighters after backing away from strikes against Syria last year. "These people are very cynical, particularly the Saudis and others, because we said we were going to strike Syria, and then the president reversed himself without even telling them," said McCain.