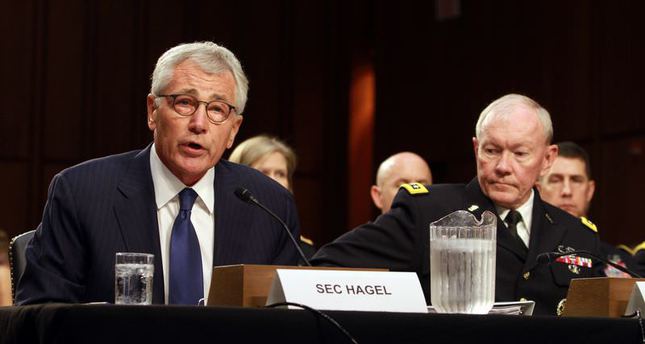 by Daily Sabah Sep 17, 2014 12:00 am
U.S. military officials gave details on the U.S.' "relentless" campaign against the Islamic State of Iraq and al-Sham (ISIS) in their latest statements. Outlines of the fight against the militants have become clearer with the responses of U.S. military leaders on possible threats of the group.

American ground troops could be deployed against ISIS fighters in Iraq, according to General Martin Dempsey, chairman of the U.S. military's Joint Chiefs of Staff. He said on Tuesday he might recommend having U.S. troops do more, potentially accompanying Iraqis during complicated offensives when close combat advising is needed, such as a battle to retake the northern city of Mosul from ISIS fighters. Dempsey acknowledged, "U.S. President Barack Obama's stated policy is that we will not have the U.S. ground forces in direct combat. But he has told me as well to come back to him on a case-by-case basis." Chuck Hagel, the U.S. defense secretary said the Obama administration plans to launch air strikes against the militant's most significant military centers in Syria, targeting command and control, logistics capabilities and infrastructure. "If left unchecked, ISIL will directly threaten our homeland and our allies," Hagel told the panel. "This will not be an easy or a brief effort. It is complicated. We are at war with ISIL, as we are with al-Qaida. But destroying ISIL will require more than military efforts alone." Hagel and Dempsey testified Tuesday before the Senate Armed Services Committee. Sen. James Inhofe cautioned that Obama's strategy might not go far enough, however. "It will take an army to beat an army. But instead the president presented a limited counterterrorism strategy that he compared to his approach in Yemen and Somalia," he said, adding: "The difference between al-Qaida in Yemen and Somalia and that of ISIS are enormous, and our strategy for each should reflect that reality. Taking this 'one size fits all' is destined for failure."

As U.S. military leaders outlined their strategy on the battlefield, the National Security Agency responded to concerns on the group's cyber capabilities. "We need to assume that there will be a cyber-dimension increasingly in almost any scenario that we're dealing with," Admiral Mike Rogers said at a cyber-security conference in Washington. "Clearly, ISIS has been very aggressive in the use of media, in the use of technology, in the use of the Internet. It's something I'm watching," he said.

The statements from different U.S. officials seem to contradict each other as Obama refuses to send troops to Iraq while Dempsey claims that the U.S. may need to do so. Also, Obama, who said the U.S. did not have any strategy against ISIS a few weeks ago, revealed a plan against the group, but some parts of the plan remain uncertain since it is not clear how the fight will be conducted. A U.S.-led anti-ISIS coalition is to be established including not only European countries but also Arab countries, and the U.S. is expected to determine the duties of those countries.
ISIS has posted beheading videos and its violent acts online, used social media, particularly Twitter, Facebook and YouTube, to recruit foreign Islamists to the fight. However, its technical capabilities, whether it can organize a cyber-attack against the U.S is less clear.

Cyber security expert James Lewis of the Center for Strategic and International Studies said he did not think the Islamic State posed any immediate cyber threat to American interests. "They would need a connection to the Syrians, Iranians or the Russians, and that is unlikely to happen," Lewis said.

U.S. fighter jets have been targeting the group's fighters in northern Iraq since Aug. 8, and in recent days, hit its fighters southwest of Baghdad for the first time in a significant expansion of the campaign. Obama has pledged to expand American efforts, and U.S. diplomats are rushing to put together an international coalition for a "relentless" campaign against ISIS.