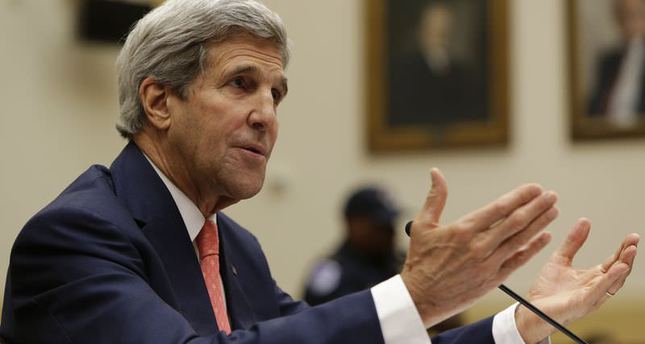 The U.S. House of Representatives gave authority to President Obama to arm moderate Syrian opposition groups who fight against ISIS in Syria, though it is uncertain who the groups will be

The U.S. House of Representatives has approved President Barack Obama's plan to train moderate Syrian opposition groups as part of his strategy to fight the Islamic State of Iraq and al-Sham (ISIS). The bill passed with a vote of 273 in favor and 156 against on Wednesday and is expected to be adopted by the Senate. If passed, the bill will go to the president to be signed into law. Obama first requested the authority to arm rebels on June 26 under a $500 million (TL 1.11 billion) program. The Pentagon intends to train, equip and resupply more than 5,000 Syrian fighters per year at facilities in Saudi Arabia.

Democrats in congress are concerned about the possibility of the U.S. being dragged into a new war in the Middle East. Republicans, however, say that Obama's strategy is limited and is not sufficient to defeat ISIS. There is also a bipartisan concern that the arms that will be provided to Syrian opposition groups may possibly fall into the wrong hands and could be traced back to the U.S. Democratic Representative Barbara Lee of California voiced the fears of many when she said, "How will we ensure that the United States weapons we are providing to Syrian rebels will not get into the wrong hands, as they did with the rebels we supported in Libya?"

Another Democrat, Representative Loretta Sanchez also expressed her concern of whether an armed Syrian opposition would be a reliable ally to the U.S. "We don't know if somehow down the line they will turn our guns right back on us," said Sanchez, who is also a member of the House Armed Services Committee.

This concern has even been voiced by the lawmakers who voted "yes." Democratic Representative James Moran of Virginia called his vote "the best choice of the worse options […] It is because there are no better alternatives and I don't think it's responsible to do nothing," he said. One of the constant critics of the Obama administration, Republican Senator John McCain of Arizona said the Syrian opposition might fight the regime of Syrian dictator Bashar al-Assad, rather than ISIS. "You don't think that the Free Syrian Army is going to fight against Bashar Assad, who has been decimating them?" McCain asked Joint Chiefs of Staff Chairman Martin Dempsey during a hearing in the Senate. "You think these people you're training will only go back to fight against ISIS?

Do you really believe that, general?" he asked. The bill was drafted as an amendment to the spending bill to keep the government funded past Sept. 30 of last year, which will expire on Dec. 11 this year. This also means that the authorization will expire in December. Thus, the bill seems to be one of the top issues on the congressional agenda after the midterm elections to be held the first week of November. The content of the bill is also vague as it does not signify what kind of arms will be provided to the Syrian rebels or whether they will be provided with heavy weaponry or not. The bill also does not include a total amount for arming and training the Syrian opposition.

Congress also put certain limitations and an effective control mechanism on administration into the bill. Testifying before a Senate committee, Secretary of State John Kerry said the forces seeking to create an Islamic state "must be defeated. Period. End of story." Yet, Kerry was harshly criticized by lawmakers for not elaborating on the plan.
Last Update: Sep 19, 2014 8:01 am
RELATED TOPICS