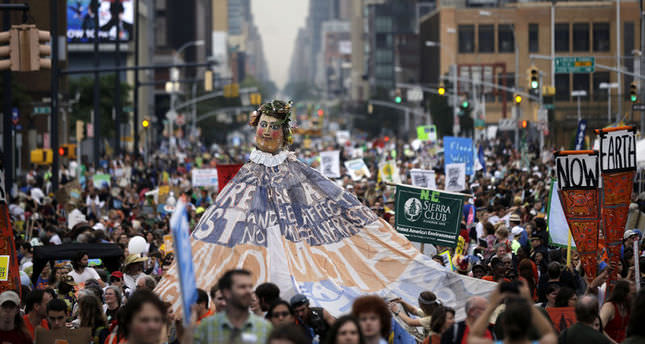 by AA Sep 22, 2014 12:00 am
More than 300,000 climate change activists have marched through the streets of Manhattan as part of a world rally demanding action on global warming, the rally's organizers have said, two days ahead of the United Nations Climate Summit in New York.

Demonstrators on the 3.5km-long People's Climate March on Sunday called for urgent action on climate change, chanting slogans and carrying placards reading: "Clean energy", "no planet B", "Business, Justice" and "Forests are not for sale".

United Nations Secretary-General Ban Ki-moon and US politicians and celebrities including former US Vice President Al Gore and actor Leonardo DiCaprio were among the crowds.

Ban Ki-moon said: "This is the planet where our subsequent generations will live."

"There is no Plan B, because we do not have Planet B."

Activists also marched in 166 countries around the world from France and the UK to Afghanistan and Bulgaria, organizers said.

The march was originally expected to draw about 100,000 people, but Ricken Patel, the executive of activist organization Avaaz which organized the event, said: "The march numbers beat our wildest expectations."

"In 2,500 marches from Paris to Bogota, we've blown past expected numbers."

"Climate change is not a green issue anymore, it's everyone's issue," he added.

A New York Police Department spokeswoman said the event passed peacefully and there were only three arrests. She declined to comment on the size of the crowd.

The march came ahead of the United Nations Climate Summit on Tuesday, where more than 120 world leaders will meet for talks aimed at agreeing a new global climate treaty by the end of 2015.