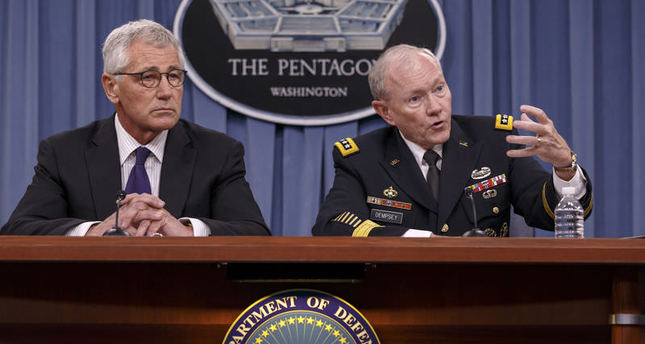 by AA Sep 27, 2014 12:00 am
The U.S. and partner nations are taking every precaution to avoid civilian casualties as they strike the ISIS, in Iraq and Syria, top defense officials said Friday.

"It is first and foremost the priority of our commanders who have responsibility for strikes to do everything they can to make sure there is no collateral damage, specifically civilian casualties," U.S. Secretary of Defense Chuck Hagel told reporters during a joint press conference with the chairman of the Joint Chiefs of Staff Army Gen. Martin Dempsey.

While Dempsey said that so far he has no reports of civilian casualties, he added that it is impossible to completely avoid the loss of innocent life. "As of course you know, you can't reduce it to zero," he said.

Hagel added that partner nations "are doing very well" in their own efforts to target militants.

The U.S. and allied nations have carried out more than 200 airstrikes in Iraq, and 43 in Syria through Friday, according to Hagel who said the U.S. has spent somewhere between $7 million and $10 million per day since the campaign began and will require additional funding from Congress as operations continue.

His remarks follow the Friday announcements that Britain, Belgium and Denmark would join the 50-plus members of the U.S.-led coalition in what is likely to be a long-term mission to rout the terror group.

"Sustaining our broad diplomatic, economic and military campaign will require a long-term commitment from the United States and all of our partners and allies," Hagel said.

Hagel said that the U.S. and Turkey continue to discuss the issue, with Dempsey adding that it is not currently part of the ongoing strategy.

"A buffer zone might at some point become a possibility, but that's not part of our campaign plan presently," he said.

The chairman clarified earlier remarks made during congressional testimony that he would recommend the use of ground troops should the ongoing air campaign against ISIS fail to defeat the group. He told reporters that the only effective force "is a force comprised of Iraqis and Kurds and moderate Syrian opposition."