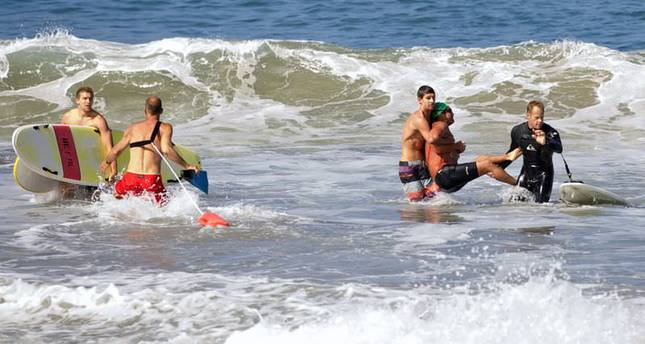 by Oct 04, 2014 12:00 am
A shark attack that left a surfer injured on the central California coast late on Thursday has led to the closure of three public beaches in the area controlled by Vandenberg Air Force Base, the military installation said on Friday.

The surfer suffered lacerations to his knee, and his surfboard was scraped in the attack by a shark measuring 8 to 10 feet in length, according to a report by Shark Research Committee President Ralph Collier, who is investigating the incident.

The base and Collier's report did not say what type of shark was involved, but local media described it as a great white.

Vandenberg Air Force base, about 160 miles northwest of Los Angeles, said in a notice that Surf, Minuteman and Wall beaches would remain closed until late afternoon on Sunday "due to safety considerations."

The attack occurred in the early evening on Thursday in waters one-quarter mile north of Wall Beach, the base said.

Despite intense media attention generated by shark attacks on humans, such incidents are fairly rare along the U.S. Pacific Coast, with 154 unprovoked attacks authenticated off California since 1900, according to the Shark Research Committee.

Thirteen fatal shark attacks on people have been documented in California during the past 60 years , with the two most recent of those, in October 2010 and October 2012, occurring at Vandenberg's Surf Beach, the group said.

"More people are killed by toasters than by sharks," said Shark Research Institute archivist Marie Levine. "Every creature is born with a menu in its brain. ... Humans are not part of a shark's menu."

On the opposite U.S. coast, two women escaped unharmed after a great white shark attacked their kayak in the waters off Manomet Point in Plymouth, Massachusetts, earlier this month.

In July, a great white hooked by fishermen on a pier bit a swimmer along Southern California coast near Manhattan Beach when the man inadvertently swam into the struggling shark. The man survived with lacerations to his torso.