Hagel: US wants use of Turkey base, help training Syrian opposition 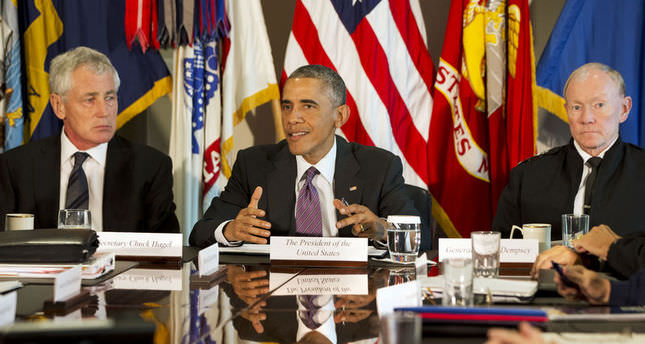 by Associated Press Oct 10, 2014 12:00 am
U.S. Defense Secretary Chuck Hagel said Thursday that the key military assistance the United States would like to get from Turkey would be access to the Turkish air base at İncirlik and an agreement to help train and equip the moderate Syrian forces.

Hagel said U.S. officials are raising those issues with Turkish leaders in discussions this week. While Ankara's persistent request for the U.S. to set up a safe zone along Turkey's border with Syria is not "actively being considered," he said, American leaders are open to a discussion about it.

The defense secretary said Turkey has military capabilities that would be valuable in the fight against the ISIS militants. The U.S. would like to be able to base various aircraft at the air base near the Syrian border, he said.

Hagel spoke to reporters on his plane as he began a six-day, three-country trip to South America. His first stop is Colombia, and he will also go to Chile and Peru, where he will attend a conference of defense ministers from the Americas.

His trip comes as the U.S. works with coalition partners to slow the advances of ISIS militants in Syria and Iraq, and as the U.S. military ramps up its troop deployments to Liberia to build medical facilities and help in the fight against Ebola.

U.S. leaders have been urging Turkey to get more involved in the battle against the ISIS extremists who have stormed across Iraq and Syria and taken control of large amounts of territory near Turkey's border. U.S. and coalition forces have been launching airstrikes near the Syrian border town of Kobani, which officials believe could fall to the militants.

The moderate rebels have been fighting to topple Syrian President Bashar Assad a goal for the U.S. As part of that effort, President Barack Obama authorized the U.S. to train and equip the rebels, also in the hopes that they could form a more cohesive fighting force against the ISIS militants.

That training has not yet begun because officials need to first select and vet the rebels for the program.

The military assault against the ISIS militants around Kobani has escalated in recent days. Since Monday the U.S. and coalition partners have launched airstrikes at more than 30 locations around the town. U.S. Central Command, which is overseeing the military campaign, said it continues to monitor the situation in Kobani.