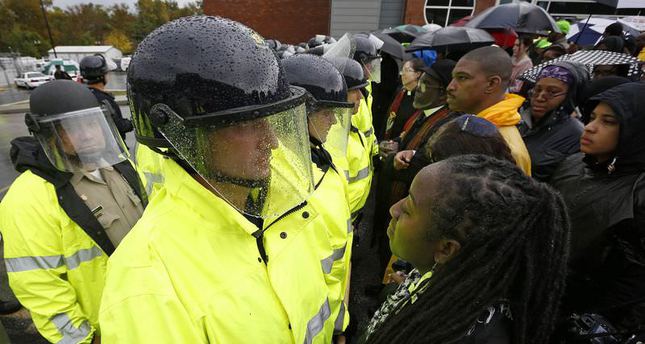 by AA Oct 14, 2014 12:00 am
Faith leaders led hundreds of protesters on a march to the Ferguson Police Department for a fourth day of protests on Monday.

Familiar chants of "No justice, no peace," and "Hey hey, ho ho, these killer cops have got to go," filled the air as demonstrators walked to the police station from a nearby church.

The protests are part of four days of planned action that organizers have called 'Ferguson October' following the shooting death of unarmed black teen Michael Brown, 18, by white police officer Darren Wilson in the St. Louis suburb of Ferguson in August.

Brown's death set off weeks of mass protests that drew thousands to the area, and which have since continued at a smaller level.

Vonderrit Myers, also 18, was shot and killed by an off-duty officer last Wednesday. It was the fourth shooting of a young black male by police in the area in two months.

Organizers on Monday used megaphones to read aloud the names of youths slain in confrontations with police officers as a steady rain turned into a gradual downpour during the protest.

March leaders demanded that police standing just a few feet away repent for the killing of Michael Brown and other acts of police violence. Their advances were met with mixed reactions as some officers engaged with clergy while others stoically looked on.

A small group of protesters breached the initially sparse police line and advanced on the front door of the station, but did not enter.

As police moved back, and were replaced with officers clad in riot gear, the crowd split into two, with one group openly committing themselves to possible arrest taking the lead, while the majority stayed back.

Protesters stayed at the site for nearly four hours, the same length of time Brown's body was not removed from the street where he was shot.

Later on Monday, groups of activists carried out protests throughout St. Louis and its suburbs, occupying stores and buildings, and holding up signs at a National Football League game.

Protesters unfurled banners at St. Louis City Hall and demanded a meeting with Mayor Francis Slay. St. Louis police confirmed that one protester was arrested at City Hall for failing to obey the reasonable direction of a police officer and resisting arrest.

Organizers said that police arrested protesters at one of three 'actions' at local Wal-Marts, including a St. Louis University law professor.

Mass demonstrations that saw thousands descend on St. Louis and its suburbs began Friday and continued throughout the weekend. Sunday night saw activists and students march through the city and on to the campus of St. Louis University where they occupied an area around a central clock tower.

The protests have been largely peaceful, but the authorities said 17 people were arrested overnight Saturday for unlawful assembly outside a gas station.

Among protesters' demands is the indictment of Wilson for Brown's death.