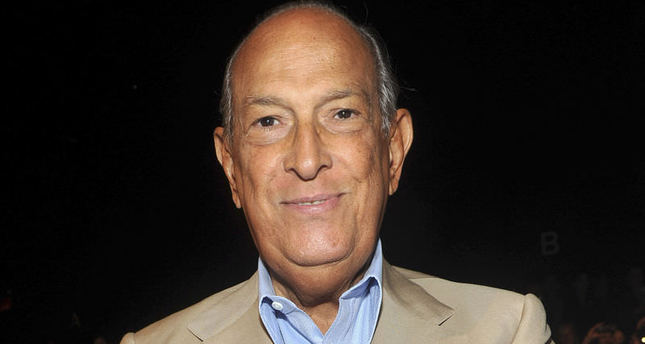 by reuters
Oct 21, 2014 12:00 am
Oscar de la Renta, one of the most sought-after fashion designers of the last half century, dressing American first ladies and Hollywood stars in his classic silhouettes, died on Monday at the age of 82.

De la Renta was born to a prominent family in the Dominican Republic and went to Spain to study art, but was drawn to fashion and started working alongside Spanish designer Cristobal Balenciaga.

He made his name in the 1960s dressing one of the major fashion icons of the day, first lady Jacqueline Kennedy, and established his company in New York in 1965.

De la Renta was known as one of the industry's classic creators, famous for elegantly feminine designs marked by flattering silhouettes with full skirts and cinched waists, often rendered in soft hues and floral patterns.

Most recently, de la Renta made the wedding dress for human rights lawyer Amal Clooney for her marriage in Venice, Italy, last month to Hollywood actor and director George Clooney.

"George and I wanted a wedding that was romantic and elegant, and I can't imagine anyone more able than Oscar to capture this mood in a dress," Amal Clooney told Vogue magazine.

The slim de la Renta cut an elegant figure himself in the New York fashion world, where he was a favorite of Vogue magazine's powerful editor, Anna Wintour, and fashion-savvy actresses like Sarah Jessica Parker.

"So sad for the loss of this legend. Oscar de la Renta, thank you for all the beauty and inspiration you shared with us," tweeted Nina Garcia, the Marie Claire creative director and judge on TV's fashion designer competition "Project Runway".

De la Renta's classic looks were popular on Hollywood's red carpets and particularly well-suited to the tastes of the first ladies at the White House, most of whom were repeat clients.

"My daughters and I have many fond memories of visits with Oscar, who designed our favorite clothes, including Jenna's wedding dress," Laura Bush, wife of former President George W. Bush, said in a statement. "We will always remember him as the man who made women look and feel beautiful."

Earlier this month, de la Renta appointed Nina Ricci's artistic director, Peter Copping, as creative director of his company, a new position that he was to assume in early November, working closely with de la Renta.

"Our industry has not always done the best job when it comes to changes in design leadership," de la Renta said in a statement on Copping's appointment. "My hope is that, in leading this selection, and actively participating in the transition, I can ensure the right design future for our company and brand."

Beyond its signature ready-to-wear women's collection, the company grew into a major luxury goods purveyor with lines of shoes, handbags, jewelry, home decor and fragrance.

De la Renta is survived by his wife, Annette.