Canadian militant confirmed to be under police radar 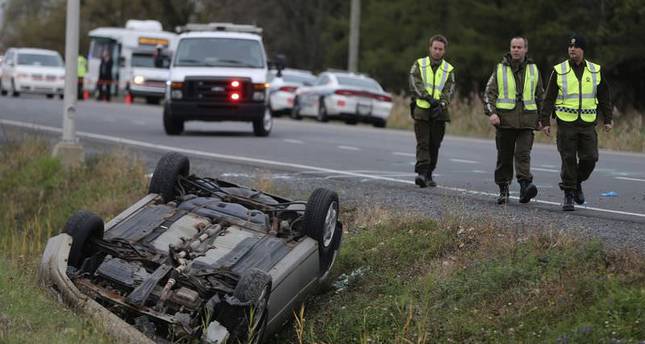 by Oct 22, 2014 12:00 am
Canadian police said on Tuesday that the militant Martin Rouleau -- who ran down two Canadian Forces members on Monday -- had been already under their surveillance after the incident at the Canadian airport in July as the militant was leaving for Turkey to join ISIS forces.

The 25-year-old Rouleau rammed his car into two soldiers in the Quebec town of Saint-Jean-sur-Richelieu on Monday and was shot dead by police. A 53-year-old adjutant died in the attack.

The incident, the first fatal attack on Canadian soil tied to ISIS, occurred after Canada announced this month it was joining the battle against ISIS fighters who have taken over parts of Iraq and Syria.

Rouleau was among 90 people being tracked by the Royal Canadian Mounted Police (RCMP) on suspicion of taking part in militant activities abroad or planning to do so.

Martine Fontaine, the RCMP official who is responsible for national security matters in Quebec, said police had never come up with enough evidence to lay charges against Rouleau and could not have predicted the attack.

"We can't arrest somebody for having radical thoughts. It's not a crime in Canada," she told a news conference in Montreal.

"It was very difficult to prevent and stop him. Even if he had been under surveillance yesterday morning, we didn't know of his intention to use his car as a weapon," she said.

Fontaine said police had become aware of Rouleau in June when they studied his Facebook site and concluded he was becoming radicalized and wanted to leave Canada to fight abroad.

As Rouleau was about to fly to Turkey in July, police arrested him on grounds that he might be about to commit an act of terror abroad.

"We had reasons to stop him," Fontaine said, adding that police never could come up with enough evidence that he intended to commit a crime either in Canada or abroad.

The RCMP took away his passport to use as evidence and then met him several times in a bid to persuade him to change his ways. Police said that at their last meeting on Oct. 9 he gave them some reason to believe he would modify his behavior, so they stopped their surveillance.

Canadian security officials have worried for years about the threat of radicalized young men, and the concern became more intense after Canada sent six fighter jets to take part in the campaign against ISIS militants in Iraq.

The government said on Tuesday it had raised its terrorism threat level to medium from low because of a rise in "general chatter" from radical groups, and not because of a specific threat.

The Canadian Security Intelligence Service (CSIS) spy agency says it is aware of at least 50 Canadians involved in terrorist-related activities with ISIS and other militant groups in the Middle East.

The government said last week it planned to boost the powers of CSIS to track potential militants when they travel abroad.