One soldier, gunman dead in parliament attack in Canada 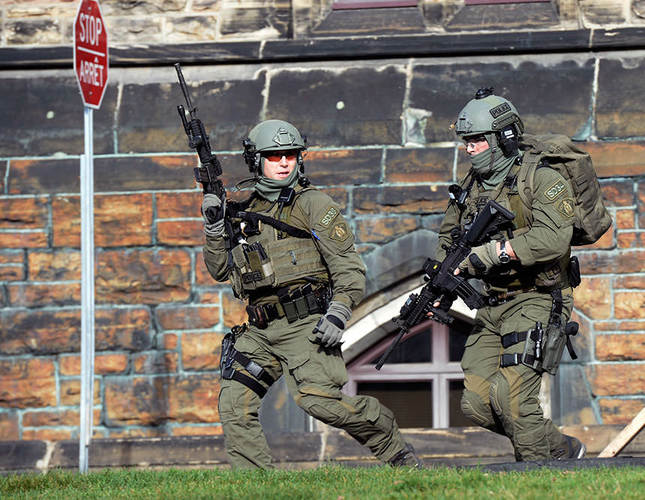 by Oct 22, 2014 12:00 am
Gunfire echoed through the Gothic halls of the Canadian parliament Wednesday as police shot dead a gunman suspected of killing a soldier guarding a nearby war memorial before storming the building.

Police said an investigation was continuing, but did not confirm earlier reports that more gunmen were involved. Heavily armed officers backed by armored vehicles sealed off the building.

Authorities had raised the security threat level from low to medium after the car attack, which came as Canadian jets were to join the US-led air armada bombarding ISIS militants in Iraq.

"One shooting victim succumbed to injuries. He was a member of the Canadian forces. Our thoughts and prayers are with his loved ones," the Ottawa Police and Royal Canadian Mounted Police said.

"One male suspect has also been confirmed as deceased," they said, in a joint statement, calling on witnesses to come forward and for residents to stay clear of Ottawa's downtown area.

Later, a police spokesman said two people received "minor injuries" in the incident, but refused to say whether more gunmen could be at large or what might have triggered the attack.

Lawmakers, staff and reporters evacuated from the building spoke of intense gunfire in the historic building on Parliament Hill.

Video footage posted online by the Globe and Mail newspaper showed police ducking for cover as they advanced along a stone hallway, loud gunfire echoing among parliament's stone columns.

A member of parliament, Maurice Vellacott, told AFP that House of Commons security had told one of his aides that the suspect had been killed inside parliament.

"Suddenly the security guards come rushing down the hallways and usher us all out to the back of the parliament buildings," he said, as lawmakers, staff and reporters scurried from the area.

Witnesses at the scene said they saw a man armed with a rifle running into parliament after shooting a guard at the war memorial.

Passers-by told reporters that a bearded man had gunned down the soldier and hijacked a passing vehicle to take him the short distance to Parliament Hill, on a bluff over the Ottawa River.

One witness, parliamentary aide Marc-Andre Viau, said he saw a man run into a caucus meeting at the parliament, chased by police armed with rifles who yelled "take cover."

Police raced to seal off the parliament building and Harper's office, pushing reporters and bystanders back and blocking roads.

Harper -- who was attending a meeting with lawmakers in parliament at the time -- left the area of the shooting and was "safe," his spokesman Jason MacDonald said.

In Canada's southern neighbor the United States, President Barack Obama condemned the attack as "outrageous" after talking by telephone with Harper, the White House said. An official said US and Canadian air defenses were on alert.

The US embassy in Ottawa was placed on lockdown.

The incident came a day after 25-year-old Martin Couture-Rouleau ran over a soldier, killing him before being shot dead by police as he emerged from his wrecked car wielding a knife.

The government branded this a terrorist attack by a suspected ISIS supporter, if the driver's alleged sympathies for ISIS are confirmed.

The government said the heightened threat level "means intelligence has indicated that an individual or group within Canada or abroad has the intent and capability to commit an act of terrorism."

After the incident, much of downtown Ottawa remained on lockdown and heavily armed officers from Ottawa Police and the Mounties continued to patrol the area.