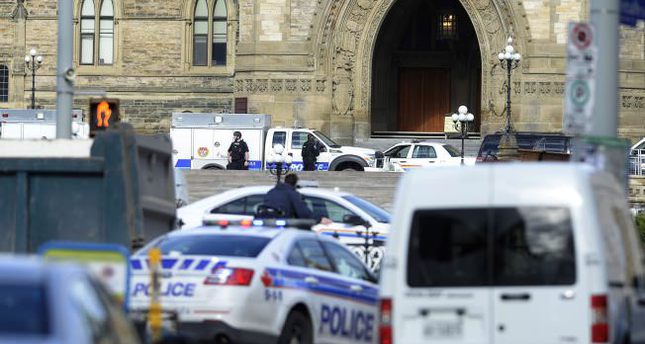 by Daily Sabah Oct 24, 2014 12:00 am
The Canadian parliament was hit by an ISIS-inspired attack on Wednesday morning with a gunman shooting in and outside the parliament complex. The shooting comes two days after a pair of Canadian soldiers was attacked near Montreal. Canada is part of the U.S.-led campaign of air strikes against the radical Islamic State and al-Sham (ISIS) militants in Iraq. The gunman, whose name was on a terror watch list, rampaged through Canada's parliament building before the assembly's sergeant-at-arms shot him dead. The attack came as Canadian jets were set to join the U.S.-led anti-ISIS campaign in Iraq. The shooting suspect named as 32-year-old Michael Zehaf-Bibeau allegedly has links to ISIS. With ISIS militants posing a greater threat to countries that are part of the anti-ISIS coalition, Canada's Prime Minister Stephen Harper said that his country "will never be intimidated" by attacks like that conducted on Wednesday. "In fact, this will lead us to strengthen our resolve and redouble our efforts and those of national security agencies to take all necessary steps to identify and counter threats and keep Canada safe," he said. The U.S. President Barack Obama also condemned the recent attack, saying that "We don't yet have all the information about whether this was part of a broader network or plan, or whether this was an individual or a series of individuals who have decided to take these actions, but it emphasizes the degree to which we have to remain vigilant when it comes to dealing with these kinds of acts of senseless violence or terrorism."

Regarding ISIS's influence over youth in Western countries, the U.S. Secretary of State John Kerry urged countries to step up their cooperation against jihadi recruits to prevent young radicals traveling to Syria and Iraq to join ISIS. Speaking at a joint press conference with German Foreign Minister Frank-Walter Steinmeier in Berlin on Wednesday, his comments came after three American girls looking to join ISIS were stopped by German police at Frankfurt airport. State Secretary Kerry expressed his gratitude to German intelligence services saying that "Everybody in the world can do more with respect to foreign fighters, ourselves included, and that is what we are doing. We are very grateful to Germany for their cooperation with us on this particular incident of some young folks who were traveling," he added.