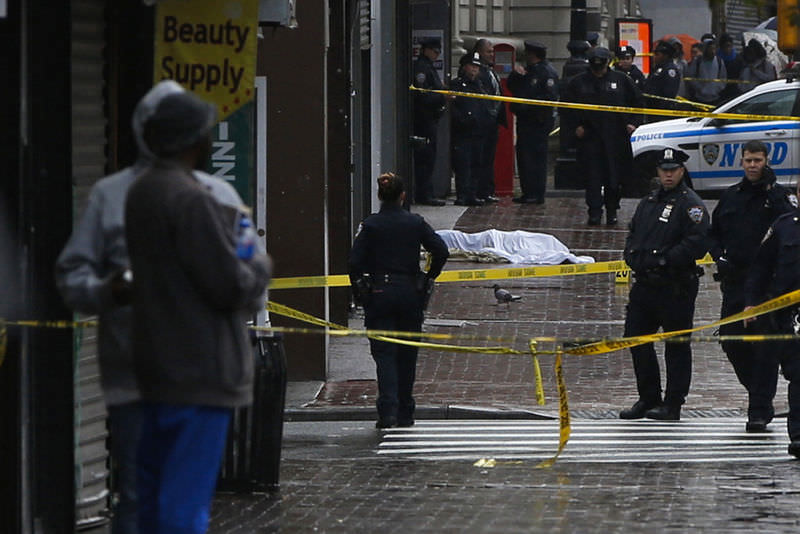 by Oct 24, 2014 12:00 am
The man who attacked New York City police officers with a hatchet before being shot dead was reported to have "extremist leanings" police and a monitoring group said.

The man, identified in the US media as Zale Thompson, had posted an array of statements on YouTube and Facebook that "display a hyper-racial focus in both religious and historical contexts, and ultimately hint at his extremist leanings," the SITE monitoring group said.

Four rookie police officers in the city's Queens borough were posing for a photograph at the request of a freelance photographer when the man walked up and without saying a word attacked them with the hatchet, a city hall statement said.

One officer was hit in the arm and another in the head before the other officers shot and killed the attacker, according to police commissioner Bill Bratton.

A 29-year-old bystander was accidentally hit by a bullet in the lower back and taken to a hospital, while the man who took the photograph was cooperating with police and was not considered a suspect, Bratton said.

The officer with the head injury was in critical but stable condition in the hospital.

SITE, which monitors radical groups, said that in a comment Thompson had posted to a pro-ISIS video on September 13, 2014.

But Bratton said that police were investigating the motive for the attack and that it was too early to determine whether it was terror-related.

"There is nothing we know of at this time that would indicate that were the case," he said.

"I think certainly the heightened concern is relative to that type of assault, based on what just happened in Canada and recent events in Israel - certainly one of the things that first comes to mind - but that's what the investigation will attempt to determine," Bratton said.

A Canadian ran his car over two soldiers in a parking lot in Quebec, killing one, before being shot dead by police on Monday. Two days later another shot an unarmed soldier at an Ottawa war memorial before storming into parliament where he was gunned down.

The authorities have said that both attackers were extremists tempted by war in Syria, but have found neither any connection between them nor evidence of a wider plot.

Canada has never before been hit by such violence, but it has been threatened in militant broadcasts over its role in the US-led air armada striking the ISIS militants in Iraq.