Suspect among two dead in US school shooting 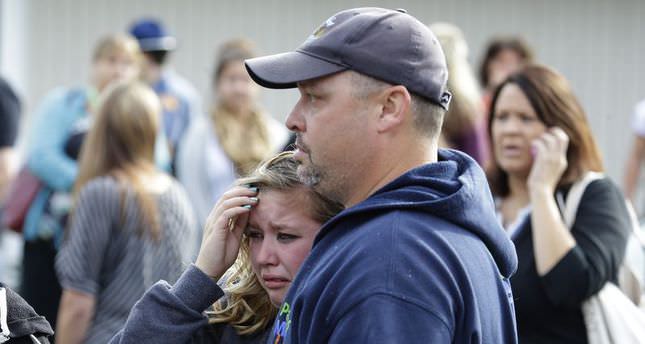 by Oct 24, 2014 12:00 am
A student opened fire at a US school Friday, killing at least one person and injuring several more before taking his own life, police and reports said Three students were rushed to hospital in critical condition after the latest such school shooting in the United States, a doctor said.

"At this point we are confirming that there are two deceased," said police spokesman Robb Lamoureux in Marysville. "We are confident that there was only one shooter and the shooter is deceased." He did not confirm that the shooter took his own life, but multiple reports said the student gunman killed himself.

Live television footage showed swarms of police and emergency workers descending on the Marysville-Pilchuck High School in the western state of Washington. The shooting occurred in the school cafeteria, according to multiple reports.

"I was eating... I heard four gunshots and it was behind me. I saw a gun pointed at a table... then I ran out of the exit," one student in the cafeteria, named only as Alex, told KIRO TV news.

A student identified as Austin told a CNN affiliate how the gunman was initially "quiet" before opening fire on fellow diners. "There was just a big group of kids. ... He was quiet. He was just sitting there. Everyone was talking. All of a sudden I see him stand up, pull something out of his pocket," he said.

"At first I thought it was just someone making a really loud noise with like a bag, like a pretty loud pop until I heard four more after that, and I saw three kids just fall from the table like they were falling to the ground dead."

Television footage also showed schoolchildren coming out of the sprawling campus in Marysville, 35 miles (55 kilometers) north of Seattle, which has some 2,500 students.

"Four patients came to this center from the scene," she said.

"The three most critically ill were kept here," she said. "All three are young people who are in very critical condition."

Parents appeared to be gathering at a nearby church. "I never thought I would be standing here after a school shooting," Heather Parker, whose son Corbin is at the school, told the Seattle Times. "He's pretty shook up. He just said 'I'm Okay.' He was trying to calm me down," he added.
Adam Holston, 14, said he was leaving the lunchroom when the shooting erupted.

"Everyone just started running. I could hear the gunshots and my heart was racing and we didn't know what was going on," he said. Austin, also speaking to a local CNN affiliate, said: "I jumped under the table as fast as I could and when it stopped I looked back up and I saw he was trying to reload his gun. "When that happened I just ran the opposite direction and I was out of there as fast as I could."