US tightens monitoring for travelers from Ebola-hit African countries 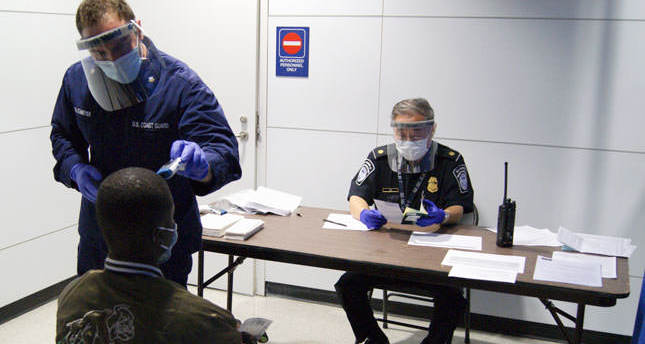 by Oct 24, 2014 12:00 am
The United States imposed new constraints on Wednesday on people entering the country from three nations at the center of West Africa's Ebola epidemic, mandating that they report their temperature daily and stay in touch with health authorities.

President Barack Obama expressed cautious optimism about the situation in the United States after meeting with his Ebola response coordinator, Ron Klain, and other top officials on Klain's first day on the job since being named on Friday.

The U.S. Centers for Disease Control and Prevention's new restrictions on travelers arriving from Liberia, Sierra Leone and Guinea marked the latest precautions put in place by the Obama administration to stop the spread of the virus. The steps stopped short of a ban on travelers from those countries demanded by some lawmakers.

Health authorities and the public have been on alert for Ebola since late September when a Liberian visiting Dallas, Texas became the first person diagnosed with the virus in the United States. Two nurses who cared for him were also infected.

The Centers for Disease control and prevention (CDC) said that, beginning on Monday, travelers from the three countries will be told to check in with health officials every day and report their temperatures and any Ebola symptoms for 21 days, the period of incubation for the virus.

The travelers will be required to provide emails, phone numbers and addresses for themselves and for a friend or relative in the United States covering the 21 days, and the information will be shared with local health authorities.

The travelers also will be required to coordinate with local public health officials if they intend to travel within the United States. If a traveler does not report in, local health officials will take immediate steps to find the person.

CDC Director Dr. Tom Frieden told reporters the active monitoring program will remain in place until the outbreak in West Africa is over. The U.N. World Health Organization's latest figures on Wednesday showed at least 4,877 people out of 9,936 confirmed, probable and suspected cases have died in the outbreak, the worst on record.

"These new measures I'm announcing today will give additional levels of safety so that people who develop symptoms of Ebola are isolated early in the course of their illness," Frieden said. "That will reduce the chance that Ebola will spread from an ill person through close contact and to healthcare workers."

Beginning Wednesday, travelers from Liberia, Sierra Leone or Guinea were being funneled through one of five major U.S. airports conducting increased screening for the virus.

Six states account for nearly 70 percent of all travelers arriving from the affected countries: New York, Pennsylvania, Maryland, Virginia, New Jersey and Georgia. The new monitoring will begin in those states first and will be expanded to other states.

The CDC said the monitoring program affects anyone coming back from the region, including CDC employees and journalists. It said when affected travelers enter one of the five airports they will receive a care kit that contains a tracking log, a pictorial description of symptoms, a thermometer, instructions on how to monitor their temperature and information on what to do if they experience symptoms.

Liberian Thomas Eric Duncan, who died on Oct. 8 and nurses Nina Pham and Amber Vinson of Texas Health Presbyterian Hospital, are the only cases detected in the country. Pham's condition was last upgraded on Tuesday to good from fair at a hospital in Bethesda, Maryland.

Speaking in the White House Oval Office with Klain sitting on a couch beside him, Obama said the CDC would continue to put in place further measures to prevent the spread of Ebola as needed.

"A number of things make us cautiously more optimistic about the situation here in the United States," Obama said, noting that dozens of people who interacted with Duncan did not get Ebola.

Obama said officials were working to ensure that problems that arose with Ebola protocols at the Dallas hospital do not occur again. He expressed confidence that any further Ebola patients would get first-class treatment and said officials would make sure hospitals are prepared and would take the right precautions.

Human testing of a second "investigational" Ebola vaccine has begun at the U.S. National Institutes of Health's Clinical Center in Maryland, officials said.

The vaccine was developed at the Public Health Agency of Canada's National Microbiology Laboratory and licensed to NewLink Genetics Corp through its wholly owned subsidiary BioProtection Systems, both based in Ames, Iowa, the NIH said.

NBC freelance cameraman Ashoka Mukpo, an American who contracted Ebola while working in West Africa, is free of the virus and was discharged on Wednesday from a special unit at Nebraska Medical Center in Omaha, the hospital said.

"I feel profoundly blessed to be alive, and in the same breath aware of the global inequalities that allowed me to be flown to an American hospital when so many Liberians die alone with minimal care," Mukpo said in a statement.