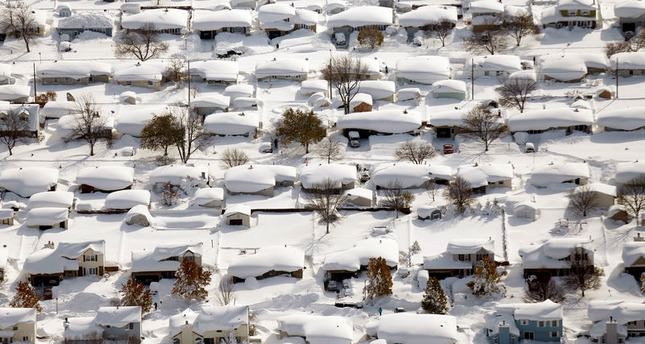 by Associated Press
Nov 20, 2014 12:00 am
A new blast of lake-effect snow pounded Buffalo for a third day on Thursday, piling more misery on a city already buried by an epic, deadly snowfall that could leave some areas with nearly 8 feet (2.5 meters)of snow on the ground when it's all done.

The storm was blamed for up to eight deaths in western New York, at least five of them from heart attacks. Officials announced the latest death on Thursday, that of a man in his 60s who was stricken Wednesday while operating a snowblower.

Now, forecasters say a rapid weekend warmup, with temperatures as high as 60 degrees (15.5 Celsius) and rain, could turn all that snow into floods.

"This is an historic event. When all is said and done, this snowstorm will break all sorts of records, and that's saying something in Buffalo," Gov. Andrew Cuomo told reporters after touring the region Wednesday. "It will get worse before it gets better."

Even for Buffalo, a place that typically shrugs at snow, this was a stunning snowfall the kind of onslaught folks will be telling their grandchildren about.

Those living in the Buffalo area were already buried under as much as 5Â½ feet (1.7 meters) of snow Wednesday, and they awoke Thursday to more heavy snow that could bring up to 3 feet (1 meter) more. The new snow and high winds moved through the city of Buffalo with lightning and thunder overnight Thursday, dropping several inches before blasting towns to the south, which were in line for the highest totals, National Weather Service meteorologist David Zaff said.

The storm came in so fast and furious over Lake Erie early Tuesday it trapped more than 100 vehicles along a 132-mile (210-kilometer) stretch of the New York State Thruway that remained closed Wednesday.

Sunny skies returned to some hard-hit areas Wednesday, but workers were still trying to cart off the acres of snow. Lake-effect snow fell heavily on some northern New York areas east of Lake Ontario.