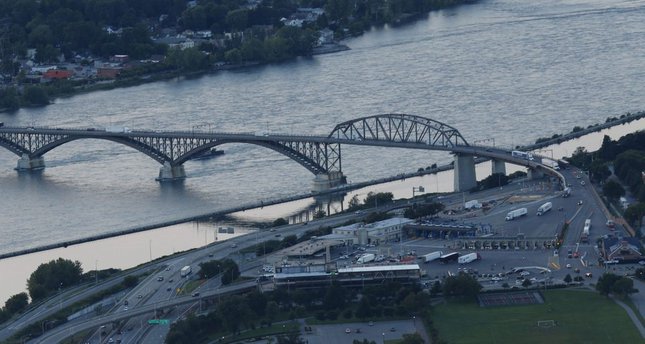 by Daily Sabah Nov 21, 2014 12:00 am
The heightened security measures in entrance to the US, which were implemented after the tragic 9/11 attacks, have been at the center of debates regarding racial profiling and civil liberties.

According to the Canadian Broadcasting Corporation (CBC), four friends with Turkish background, three of them Canadian citizens and one an international student with a Canadian visa, were driving to New York City for a weekend but were denied entry.

The four men, who all have university degrees and established lives in Canada, said that they were treated like second-class citizens, detained, interrogated, and humiliated as a result of racial profiling based on their backgrounds, the report said. The CBC report also said that the young men were asked to fill out forms and their mobile phones confiscated.

Furthermore, the four Turkish men now fear how the information regarding their rejection will be used and are concerned that they may never be allowed to go to U.S. since they were asked to provide their fingerprints and had their photos taken, the report added.

The four men were reportedly questioned for six hours on various issues, mostly about their thoughts on the ongoing conflict in Syria.

Visitors to the U.S. have been victims of racial profiling, interrogations at the border, as well as denied entries, despite providing legal and legitimate documents necessary for their admittance to U.S.

As part of these intensified security measures, the borders between the U.S. and Canada have also been affected. Previously, Canadian citizens were able to enter U.S. without a passport, however, this had changed post 9/11.

With the current events in the Middle East, and the rise of terrorist groups such as ISIS, the already tight measures have been further intensified, prompting concerns about the racial profiling of those visitors to the U.S. with Middle East or Muslim backgrounds, based on religious background or skin color, and the violation of their civil liberties.