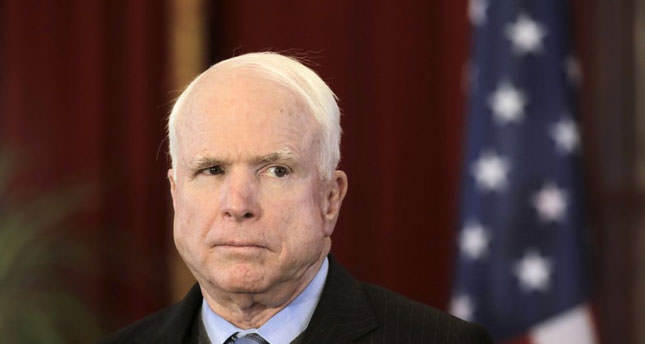 by Daily Sabah with AA
Nov 21, 2014 12:00 am
President Barack Obama's nominee for deputy secretary of state was grilled on Wednesday during his confirmation hearing before the Senate Foreign Relations Committee. Deputy National Security Council advisor Tony Blinken engaged in heated exchanges with senators when asked about the administration's strategy for dealing with Syrian President Bashar Assad.

"During the G20 over the weekend, President Obama was asked if he was actively discussing ways to remove President Assad as part of a political transition. His response was, 'no,' " said Senator John McCain. McCain stressed that he was contradicting the president's own nominee who had previously remarked that, "The best way to deal with Assad is to transition him out."

Blinken, tried to defend Obama by saying the administration supports moderate Syrian opposition forces and would train and equip those fighters against Assad and the self-proclaimed Islamic State of Iraq and al-Sham (ISIS).

It is known that prominent Republicans, like John McCain, have been advocating a policy that aims to topple Assad. The Obama administration seems confused due to officials' contradictory statements on Syria.

U.S. President Barack Obama said, "Certainly no changes have taken place with respect to our attitude towards Bashar Assad," although CNN last week reported that he told his advisers to review the policy on Syria after realizing that ISIS cannot be defeated as long as Assad remains in power. Last week another statement was made by U.S. Secretary of State John Kerry. He said "Assad and ISIS are symbiotic. ISIS presents itself as the only alternative to Assad. Assad purports to be the last line of defense against ISIS. Both are stronger as a result."

On Wednesday, another confusing statement came from the top U.S. General Martin Dempsey. Despite the talks of removing Assad on the table, "My mission is to defeat ISIS, not to build a nation or topple the Syrian regime," Joint Chiefs of Staff chairman, General Martin Dempsey, told an audience of defense and security leaders at a Defense Summit in Washington. Dempsey said "the counter-ISIS strategy has to exist in both Iraq and Syria," however, as for the military strategy specifically, prioritize Iraq.

The U.S. has built a coalition including Arab and European states to battle ISIS in Iraq and Syria through carrying out airstrikes, training and arming the Iraqi forces and armed Kurdish fighters. Hundreds of airstrikes were carried out since late September to eradicate ISIS from Iraq and Syria. Although it was reported that ISIS's advances in Iraq had stopped, the militant group still controls large amounts of territory in Syria and continues its attempts to capture Kobani, a Syrian Kurdish town near the Turkish border.