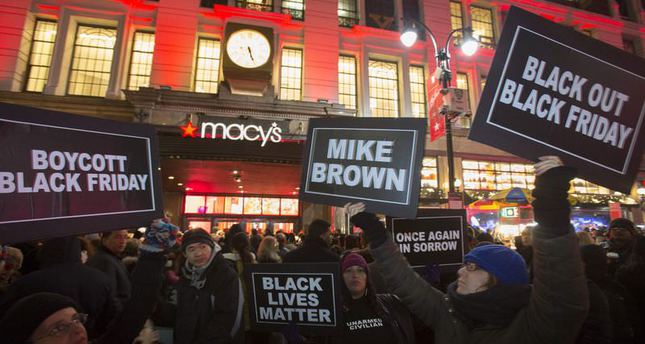 by Associated Press
Nov 28, 2014 12:00 am
Demonstrators sought to catch the attention of shoppers looking for good deals on Friday, going to major retailers around the St. Louis area to speak out about a grand jury's decision not to indict the white police officer who fatally shot Michael Brown, an unarmed black 18-year-old.

Other protests were planned at shopping centers around the nation, though attendance was seemingly sparse aside from in Chicago, where about 200 people gathered near the city's Magnificent Mile shopping district.

Early Friday in the St. Louis suburb of Manchester, about two dozen people chanted "no justice, no peace, no racist police" and "no more Black Friday" after police moved them out of a Wal-Mart.

Officers warned the protesters risked arrest if they didn't move at least 50 feet from the store's entrance, then began advancing in unison until the protesters moved further into the parking lot. The mostly black group of protesters chanted in the faces of the officers most of whom were white as shoppers looked on.

"We want to really let the world know that it is no longer business as usual," said Chenjerai Kumanyika, an assistant professor at Clemson University.

Since Monday night's announcement that Ferguson police officer Darren Wilson wouldn't be indicted for fatally shooting Brown in August, protests have occurred in Ferguson and across the country. A dozen buildings and some cars were torched in Ferguson on Monday night and dozens were arrested, but the protests have grown more peaceful as the week went on.

About 200 people demonstrated Friday in a plaza near the Chicago's historic water tower, calling on people to boycott Black Friday shopping as a show of solidarity with protesters in Ferguson.

But other planned events around the country seemed relatively brief and thinly attended in contrast to the large demonstrations earlier this week. In Brooklyn, New York, a "Hands Up, Don't Shop" protest had been scheduled, but no one materialized.