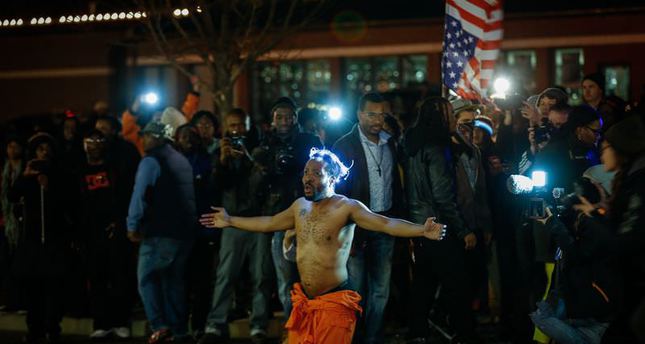 The white police officer who fatally shot an unarmed black teenager in Ferguson, Missouri, resigned from the police force due to safety concerns as announced by his lawyer. His resignation comes four months after he brutally shot and killed 18-year-old Michael Brown.

"In terms of his safety, it is probably the best thing for him," said Cynthia Burnes, a Ferguson resident, who was among a group of 50 people gathered in front of the Ferguson police headquarters on Saturday evening, as reported by Reuters. "He is black-listed from this moment on," she added stressing the growing anger toward the Ferguson police officer. Wilson, who had been with the Ferguson Police Department for less than three years, told the St. Louis Post-Dispatch he decided to step down after the department told him it had received threats of violence if he remained on the force. "I am not willing to let someone else get hurt because of me," Wilson told the newspaper Saturday.

Darren Wilson has testified to the court to prove that he was innocent in the shooting. "The reason I have a clean conscience is because I know I did my job right," he said in an interview with ABC news, aired last Tuesday, as he broke his silence over the shooting. "I fired a series of shots and paused," Wilson said. "I yelled, 'Stop, get on the ground,' giving him the opportunity to stop, and he ignored the command." Wilson also stated that he would have acted the same way if Brown had been a white teenager, stressing that there was no racist inclination in his act.

After the grand jury declined to indict a white police officer, 28-year-old Darren Wilson who fatally shot unarmed black teenager Michael Brown in August, public anger in the United States has spilled over with people disappointed due to the grand jury's decision. The incident sharply divided the country amid conflicting accounts of what happened on the night the unarmed young black American was shot dead by a white police officer.

Regarding the Ferguson shooting, hundreds of thousands of people continue protesting the excessive use of force by the U.S. police against African Americans, as to indicating the prevailing racial discrimination in the U.S. Since the Ferguson shooting on August 9, many people have been calling for "a reform of police practices [especially towards black American citizens], a new police chief in Ferguson and a national law to prevent racial profiling by police. A seven-day march from Ferguson to Jefferson City was organized by the National Association for the Advancement of Colored People (NAACP) in an attempt to draw attention to the U.S. police brutality.

Meanwhile, the Ferguson shooting has received significant worldwide attention as people around the world including people in Berlin and London give considerable support to the Ferguson protesters in the U.S. The Ferguson protesters in Berlin held banners with slogans "black lives matter," "solidarity with Ferguson" and "Ferguson is everywhere" while making statements on the incident, according to Anadolu Agency reporting from Berlin. Though protests calmed significantly, more than 100 people have been arrested since Monday, including 16 at a protest Friday night outside the Ferguson police station. Portland, Oregon police said 10 people were arrested Saturday night "after a large group of protesters lay down in the street and refused lawful orders to clear the roadway." The nine adults and one juvenile arrested will face charges that include disorderly conduct.

Demonstrations, held in other U.S. cities, are expected to continue, though a sense of normalcy or at least a new normal has begun to settle in the city.

Earlier on Saturday, police reopened several blocks of West Florissant that had been barricaded off since Tuesday. Although most store windows were still boarded up, many have been decorated or spray-painted with messages saying the stores are open and welcoming shoppers.

The small and predominantly black town of Ferguson encountered racially charged civil unrest after Michael Brown, an unarmed black teenager, was shot dead by a white police officer on Aug. 9. Since then, tension has remained high in the town while many people waited for police officer Wilson to face criminal charges. The tension in the U.S. society was strained largely after the Ohio shooting. The Ohio police shooting of another young black American on Nov. 17 has further fuelled racial tension in the country. A 12-year-old black American boy named Tamir Rice, grabbing what turned out to be a replica gun, was shot dead by a police officer in the U.S. city of Cleveland.