Obama emphasizes need for building trust between police and blacks 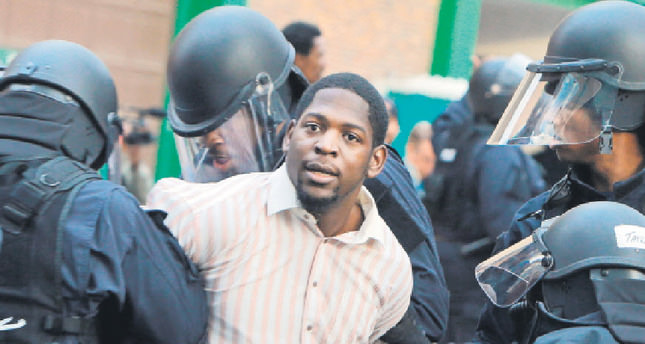 Following the mass protests over the Ferguson shooting, U.S. President Obama discussed the deadly police shootings of black citizens and emphasized the need to rebuild trust between police forces and black Americans

As the Ferguson shooting reveals the excessive use of force by well-armed local police units, U.S. President Barack Obama met with his cabinet, young civil rights leaders and law enforcement officials on Monday to discuss the growing mistrust between the black community and local police forces. The military-style equipment of law enforcement agencies was at the top of the Cabinet meeting's agenda. In response to intense disagreement by the majority of American society to the grand jury decision over the police shooting of an unarmed black teenager, President Obama discussed the "deep distrust [that] exists between law enforcement and communities of color" and the prevailing racial discrimination towards the black community.

The meeting covered the issues related to the Ferguson shooting and "how communities and law enforcement can work together to build trust to strengthen neighborhoods across the country," the White House said in the statement on Sunday.

Taking the military equipment used by local police into account, many Americans have been feeling threatened by America's increasingly militarized police force. "During the Obama administration, according to Pentagon data, police departments have received tens of thousands of machine guns, nearly 200,000 ammunition magazines, thousands of pieces of camouflage and night-vision equipment [as well as] hundreds of silencers, armored cars and aircraft," quoted a New York Times article published on June 8.

The American Civil Liberties Union (ACLU) issued a comprehensive report on the militarization of policing in June titled "War Comes Home: The Excessive Militarization of American Policing." This report demonstrates that "police militarization is a pervasive problem" due to the fact that "American policing has become unnecessarily and dangerously militarized, in large part through federal programs that have armed state and local law enforcement agencies with the weapons and tactics of war."

After the long criminal inquiry into the police shooting of an unarmed black teenager, the grand jury decided on Nov. 24 not to indict the white police officer, Darren Wilson, in the death of Michael Brown. As many people were disappointed with the jury's decision, the tension flared up again in the streets of the riot-struck U.S. city of Ferguson. The public anger in the United States has led to violence and has spread not only to other U.S. cities but also received worldwide attention.

Following the repeated nights of racially charged unrest in Ferguson, the mayor of Ferguson pledged on Sunday to rebuild the town that was left damaged to a large extent. "We are recommitted to rebuilding the city and to once again becoming a thriving community for economic development and residential stability," Ferguson Mayor James Knowles said at a news conference, as reported by AFP news agency. The mayor also talked about "plans and incentives to increase the racial mix of the police department, which is overwhelmingly white, even though Ferguson has a predominantly black population."

In an effort to draw attention to U.S. police brutality towards the black community, hundreds of thousands of people continue protesting. Many people have called for "a reform of police practices [especially toward blacks], a new police chief in Ferguson and a national law to prevent racial profiling by police during worldwide protests.

The Midwestern city of Ferguson has been hit by violent unrest since the fatal police shooting of Michael Brown in Aug. 9. Since then, the unrest never ceased in the violence-hit town even though a sense of normalcy has reportedly begun to settle into the city. In addition to the case of Ferguson, a shooting in Ohio has further strained the tension. The Ohio police shooting of another young black American on Nov. 17 further fuelled the racial tension in the country.