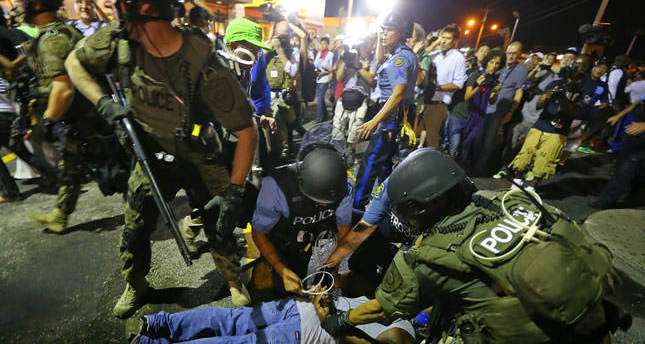 by Dec 04, 2014 12:00 am
Some Ferguson-area residents arrested during racially charged protests in the Missouri town last week told Reuters they were unlawfully arrested by police and were just trying to get home when they were picked up and taken to jail. Reuters was not able to independently verify the allegations from the six individuals interviewed. Their accusations come amid an investigation by U.S. Attorney General Eric Holder into potential civil rights abuses by police in Ferguson during protests that first erupted over the summer following the police shooting of an unarmed black teenager.

Kayla, a 17-year-old high school senior who did not want to give her full name, and Yetta Young, 23, a home health worker, said they were picked up by police as they walked home from work. They were arrested separately and charged with second degree burglary. Police said in sworn statements that Kayla was charged with burglarizing a Toys R Us and Young with burglarizing a convenience store 2 miles away. Both stores were looted during last week's protests, according to the police. The manager of the Ferguson Toys R Us said surveillance video from the night of Nov. 24 had been given to the police and declined to discuss what it showed. The owner of the convenience store, which was boarded up and locked on Monday, could not be reached for comment. In a third incident, three men and a woman told Reuters police pulled them out of their car at a gas station and repeatedly used a stun gun on one of them after zip-tying his hands behind his back. The four said they were there to buy gas and were doing nothing wrong. They were arrested for trespassing but released the next day without being charged, according to the police report. "There is more than one side to each explanation of the incidents," said Rick Eckhard, a spokesman for the St. Louis County Police, the force that made the arrests. He declined to comment on the individual cases, saying they were all active investigations. It is not uncommon for innocent bystanders to be swept up by police trying to keep protests under control, according to Matthew Horace, a former Virginia police officer who is now the senior vice president at New York-based FJC Security. Horace was not in Ferguson at the time of the arrests but said he was drawing on his experience policing in the Washington area, where protesters routinely gather. Young's mother Helen said she watched as a crowd of people being chased by police ran past Yetta, knocking her daughter to the ground. Police then grabbed and arrested her. Reuters could not find anyone else who witnessed the incident and was not able to speak Young, who is still in jail, unable to post the $36,000 cash-only bond a judge set based on her second-degree burglary charge. Kayla said she was arrested as she was leaving a clinic where she is an intern. Two police officers chasing a crowd grabbed her and held her with others in a Toys R Us parking lot. She was later charged with burglarizing the store and released on a $2,200 bond paid by the bail fund established by a network of lawyers representing scores of those arrested.

The lawyers' group said it was investigating the circumstances of each arrest, adding that a number of protesters were claiming they had been arrested without probable cause. "Most everyone tells the same story," said Brendan Roediger, an assistant professor at St. Louis University School of Law, who is part of the group. "Police rounded up a number of people who just happened to be in the area." Roediger declined to provide other examples of allegedly unlawful arrests, saying the lawyers representing those arrested did not want to make public their clients' information. He said his team was preparing a lawsuit on behalf of people who say their civil rights were violated during the protests. A grand jury's decision on Nov. 24 not to indict Ferguson police officer Darren Wilson for the death of Michael Brown ignited violent protests that led to more than 100 arrests.

Alexander Freeman, 21, said he was in his car with three friends at a gas station on Nov. 24 when police blocked off both exits. Others at the gas station fled, he said, driving over sidewalks to get away, but he couldn't move fast enough. Freeman said police ordered him and his friends out of the car and onto the ground. "They zip-tied our hands, they didn't read us our rights, and they searched the car," he said, adding that he watched police use a stun gun on a friend.