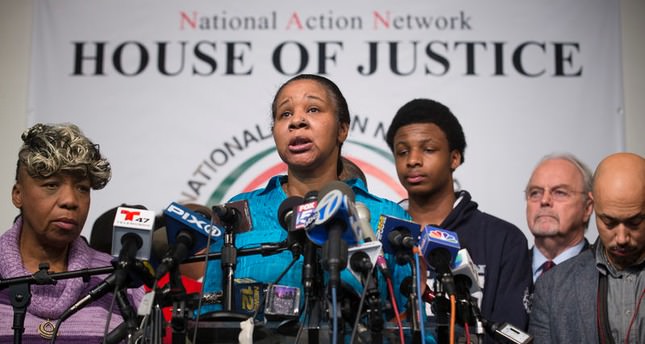 by Associated Press Dec 06, 2014 12:00 am
The mother and widow of the unarmed black man whose videotaped chokehold death sparked protests across the country said on Saturday they've been moved by the thousands of peaceful demonstrators who have taken to the streets after a New York City grand jury declined to indict the white police officer involved.

"It is just so awesome to see how the crowds are out there," said Eric Garner's mother, Gwen Carr, who said she herself was stuck in her car after protests shut down traffic.

"I was just so proud of that crowd," Carr said. "It just warmed my heart."

Garner's widow, Esaw Garner, said she saw demonstrators from her apartment window and told her son, "Look at all the love that your father's getting."

Garner's relatives spoke on Saturday morning at the Harlem headquarters of the Rev. Al Sharpton, a prominent civil rights activist. Sharpton and Garner's family planned to lay a wreath later on Saturday at the site of Garner's July 17 death in the New York City borough of Staten Island.

Demonstrators around the country have staged die-ins, blocked roadways and have marched into stores since the grand jury's decision on Wednesday not to indict the white police officer in the chokehold death of Garner, a black man who repeatedly gasped "I can't breathe" while he was being arrest for selling loose, untaxed cigarettes.

Nationwide, tensions were already running high because of a grand jury's decision last week not to indict a white officer in the shooting death of Michael Brown, an unarmed black 18-year-old, in Ferguson, Missouri.

Police said 20 protesters were arrested on disorderly conduct charges in New York Friday night. Hundreds of protesters marched and many briefly laid down in Macy's flagship department store, Grand Central Terminal and an Apple store. They streamed along Fifth Avenue sidewalks and other parts of Manhattan, with signs and chants of "Black lives matter" and "I can't breathe," referring to the last words uttered by the dying Garner while he was forcibly restrained by police. Protesters later blocked traffic on the FDR Drive in Lower Manhattan, spurring arrests.

In Oakland, California, hundreds of protesters briefly blocked Interstate 880, a major freeway, on Friday night. There were no immediate reports of any arrests or injuries.

Protests have also been held in Philadelphia, Chicago, Miami and dozens of other cities.

In suburban New York City on Friday, about 65 demonstrators lay down on a street corner in protest. Among them were Jason Walker of Atlanta, in New York for a wedding, and his 3-year-old daughter, Jaidyn. She told her father she wanted to lie down when the demonstrators did, and she lay on the sidewalk for the full 7 minutes, occasionally covering her eyes.

In New Haven, Connecticut, home of Yale University, hundreds of demonstrators marched on Friday afternoon from the law school to the courthouse. In New Jersey, dozens of students from Rutgers University walked through New Brunswick, slowing downtown rush-hour traffic to a crawl and forcing the city to postpone a tree lighting ceremony scheduled at Monument Square.

In Florida, activists marched through the streets of midtown Miami and blocked a major causeway connecting Miami to Miami Beach. In Providence, Rhode Island, several hundred people blocked downtown streets, while city police had to stop some protesters from walking onto Interstate 95 on Friday night. No arrests were reported.

The protests have been mostly peaceful.