Many arrested in the US protests over police brutality 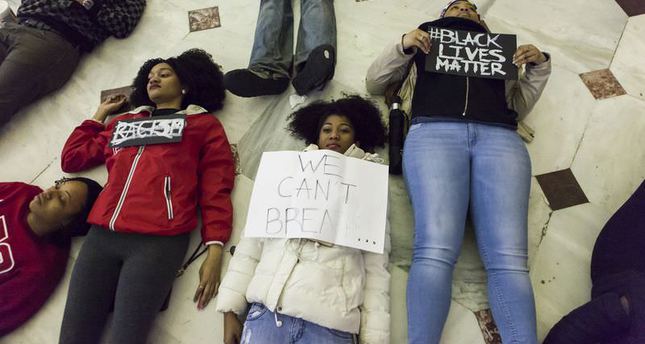 by Dec 06, 2014 12:00 am
Protests over U.S. police violence against minorities, sparked by grand-jury decisions not to charge officers in two high-profile cases, were peaceful on their third night in New York although 20 arrests took place, authorities said on Saturday.

Protesters were arrested for disorderly conduct and blocking traffic on the city's FDR Drive, a major artery that runs along the eastern side of Manhattan, police said.

"The protests remained very peaceful throughout the night," said Detective Michael DeBonis, a spokesman for the New York Police Department.

The wave of angry protests began on Wednesday when a New York grand jury declined to bring charges against white officer Daniel Pantaleo in the chokehold death of Eric Garner, a black 43-year-old father of six.

The decision came nine days after a Ferguson, Missouri grand jury chose not to indict a white policeman for the shooting death in August of an unarmed black teenager, spurring two nights of arson and unrest there.

More protests were planned in New York for Saturday, as was the funeral of an unarmed black man shot dead by police in a Brooklyn housing project.

The death of Akai Gurley, 28, has added fuel to the public outrage over what many perceive as race-based violence by law enforcement.

The Brooklyn district attorney said on Friday a grand jury would be convened to consider charges against the officer who shot Gurley. Police have said the officer, Peter Liang, may have accidentally discharged his gun.

While the first two nights of protests saw thousands of demonstrators pouring into the streets of New York, the turnout on Friday dropped to the hundreds as a cold, steady rain fell.

Still, more than 100 people stormed into an Apple Store on Fifth Avenue to stage a brief "die-in," sprawling on the floor as shoppers and employees watched.

In Cleveland on Friday, the family of a black 12-year-old boy fatally shot by police filed a lawsuit against the city, a day after the federal government found the police department systematically uses excessive force.