Who is Obama’s nominee for defence secretary? 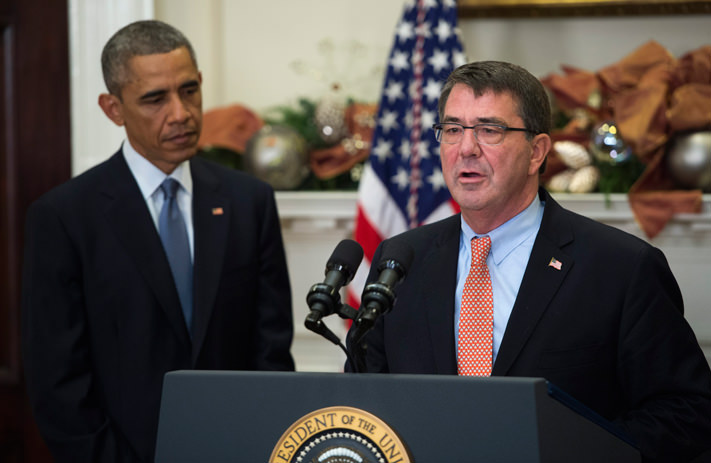 Carter, 60, has worked for 11 secretaries of defense and served as deputy defense secretary under Leon Panetta from October 2011 to December 2013. Before then, from April 2009 until October 2011, Carter served as undersecretary of defense for acquisition, technology and Logistics.

According to the Pentagon, as undersecretary, Carter led the department's efforts to accelerate the fulfillment of urgent operational needs, increase the department's buying power and strengthen the nation's defenses against emerging threats. With a long career in defense, he has been awarded the Department of Defense Distinguished Service Medal four times, along with the Defense Intelligence Medal for his contributions to intelligence efforts.

Unlike Hagel, who was injured in the Vietnam War, Carter was never a solider in uniform. After resigning from the Pentagon's top job for his disagreement and questioning of the administration's policy on the Islamic State of Iraq and al-Sham (ISIS) and the Syrian regime, Hagel released a statement that supported Carter's new role as his successor.

Aside from his experience in the Pentagon, Carter is known for his exceptional academic performance. Carter, a married father of two, received a bachelor's degree in physics and medieval history from Yale University before earning a PhD in theoretical physics from Oxford University where he was a Rhodes Scholar. He has published scientific articles, government studies and congressional testimonies while co-authoring and co-editing 11 books.

Although the president nominated Carter, they are not always on the same page. He was a sharp critic of budget cuts that hit the Pentagon in 2011 under a sequestration deal between Obama and congressional Republicans. He labeled the cuts "an embarrassment" and "a disgrace" and something that should never have been implemented.

Long before Obama, Carter was a long-time critic of former U.S. President Ronald Reagan's Star Wars initiative during the Cold War. The initiative intended to develop an anti-ballistic missile system to prevent attacks from other nations, particularly the Soviet Union. Carter played an important role at the end of the Cold War in reducing U.S. and Russian arsenals.

As a key behind-the-scenes player, Carter would bring technocratic efficiency into the Pentagon at a time when it is dealing with an assortment of international crises.

"He's a technocrat and a good manager," Jane Harman, president of the Wilson Center, told the Associated Press. "He knows the acquisitions side of the building and has impressed the military with his commitment to the troops."