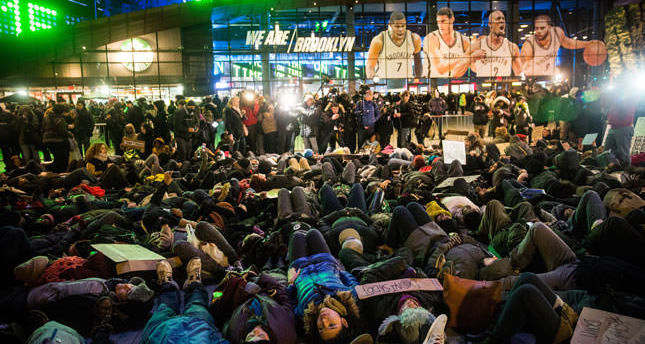 by Daily Sabah Dec 10, 2014 12:00 am
Protests have been held in cities across the U.S. after a grand jury decided on Wednesday not to indict police officer Daniel Pantaleo for the death of Eric Garner, a 43-year-old, unarmed black father of six.

The decision in the Garner case came after a different grand jury also decided to clear the officer who shot Michael Brown in August.

Protesters are angry about police brutality, race equality and the grand jury process. Demonstrations took place yesterday in New York in front of a sports complex during an NBA game attended by the Duke and Duchess of Cambridge, William and Kate, during a trip to the city.

About 100 protesters met at the Barclays Center in Brooklyn where the Brooklyn Nets were playing the Cleveland Cavaliers. This gathering followed the trend of many recent protests.

Instead of the traditional sit-in, protesters lay on the floor in a staged "die-in," a form of civil disobedience where demonstrators lie down in a public space and remain still, as if dead. Several members of the New York City Council joined in solidarity with the protesters.

Police stopped protesters when they attempted to block traffic on main roads and enter shopping complexes. Unlike the protests that took place on Sunday night in Berkeley near San Fransisco, the die-in was peaceful.

Police in Berkeley on Monday said they made five arrests on Sunday, as an angry crowd of 500 protesters threw rocks and objects at police who responded with tear gas.

The Justice Department and the New York Police Department are conducting an internal investigation into the Garner case. Since Pantaleo used a prohibited chokehold, the examination into whether he broke any departmental rules could take four months, officials have said.

"The horrible events surrounding the death of Eric Garner have revealed a deep crisis of confidence in some of the fundamental elements of our criminal justice system," said New York Attorney General Eric Schneiderman in a statement. "Nothing could be more critical for both the public and the police officers who work tirelessly to keep our communities safe than acting immediately to restore trust."

Schneiderman said he was seeking a temporary executive order from New York Governor Andrew Cuomo, shifting authority from local prosecutors to the state to investigate the recent police killings of unarmed civilians, until legislators can pass a more stable measure. "We are reviewing the attorney general's proposal," said New York state spokeswoman Melissa DeRosa, saying that the governor plans a "top to bottom review" of the system.

Meanwhile, the angry masses organized demonstrations also in California. The protesters shut down a major freeway. The police response to the protesters was harsh and more than 150 people were arrested. Protesters threw rocks and other objects at officers, California Highway Patrol spokesman Daniel Hill said. After the police intervention, the freeway was cleared from the protesters.