Thousands March against US police brutality in Washington 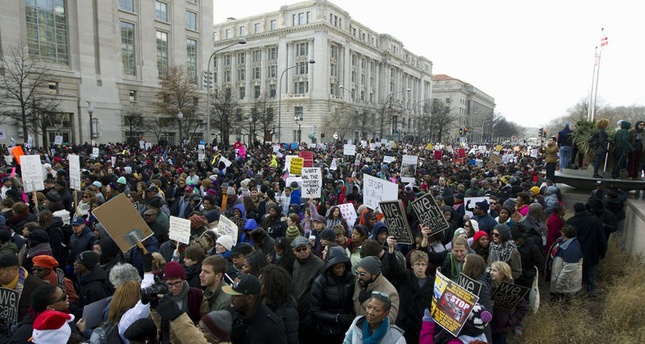 by Associated Press Dec 13, 2014 12:00 am
Thousands of protesters made their way down iconic Pennsylvania Avenue on Saturday, marching to the U.S. Capitol to call attention to the deaths of unarmed black men at the hands of police and call for legislative action.

With signs reading "Black Lives Matter" and "Who do you protect? Who do you serve," the crowd gathered in Freedom Plaza before the march.

"Let's keep it strong, long and meaningful," Esaw Garner the widow of Eric Garner, killed by a police officer using a choke hold in New York City in July told the group.

The rally was interrupted briefly by more than a dozen protesters who took the stage with a bullhorn. They announced that they were from St. Louis and Ferguson, Missouri where 18-year-old Michael Brown was fatally shot by an officer and demanded to speak.

Large numbers of protesters on the ground supported the group, some chanting, "Let them speak."

Ultimately, rally organizers allowed Johnetta Elzie of St. Louis to address the crowd. "This movement was started by the young people," she said. The group, mostly in their 20s, left the stage after she spoke.

Organizers called the interruption unnecessarily divisive. But some in the Missouri group said they were disappointed and found the rally staid and ineffective.

"I thought there was going to be actions, not a show. This is a show," Elzie said.

The Rev. Al Sharpton, a prominent civil rights activist, addressed the interruption and told the crowd, "Don't let no provocateurs get you out of line. ... We are not here to play big shot. We are here to win."

Then, block after block of tightly packed people moved through the city. Organizers had predicted 5,000 people, but the crowd appeared to far outnumber that.

Protests some violent have occurred around the U.S. since grand juries last month declined to indict the officers involved in the deaths of Brown and Garner, 43, who gasped "I can't breathe" while being arrested for allegedly selling loose, untaxed cigarettes in New York. Some protesters held signs and wore shirts that said "I can't breathe" Saturday.

Politicians and others have talked about the need for better police training, body cameras and changes in the grand jury process to restore faith in the legal system.

Terry Baisden, 52, of Baltimore said she is "hopeful change is coming" and that the movement is not part of a fleeting flash of anger.

She said she hasn't protested before but felt compelled to because "changes in action, changes in belief, happen in numbers."

Murry Edwards said he made the trip to Washington from St. Louis because he wants to make sure the momentum from the movement in Ferguson reaches a national stage.

Saturday's march was sponsored in part by such leading civil rights groups as the National Action Network, the Urban League and the NAACP. At the Capitol, speakers will outline a legislative agenda they want Congress to pursue in relation to police killings.

While protesters rally in Washington, other groups including Ferguson Action will be conducting similar "Day of Resistance" movements all around the U.S., including a large march in New York City.

Justice for All March http://nationalactionnetwork.net/march-police/