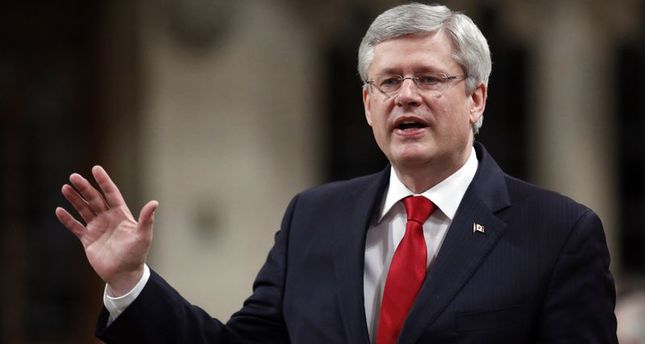 by AA Dec 20, 2014 12:00 am
Canada announced new sanctions against Russia on Friday, to put pressure on the country's economy amid the ruble crisis.

According to a written statement made by Prime Minister Stephen Harper, sanctions include restrictions on the export of technology used in Russia's oil exploration and extractive sector. There will be also travel bans against 11 Russian and nine Ukrainian individuals.

The Russian ruble took a major fall Tuesday, losing more than 20 percent of its value in a single day. Although the currency has since managed to make modest gains, it still remains at lows not seen since 1998.

The move by Canada is a response to Russia's annexation of Crimea and its support for separatist rebels in eastern Ukraine.

"Canada will not accept the illegal occupation of Crimea and persistent, provocative military activity in eastern Ukraine," Harper said in his statement. "We will stand in steadfast support of the Ukrainian people as they continue to struggle for peace and freedom against the Putin regime."

Harper added: "We stand ready to take further proposed measures with our allies and partners if required."

His remarks came after the European Union and the U.S. imposed sanctions against Russian-controlled Crimea.

On Thursday, European companies said that they would be prohibited from exporting goods and technology that could be used by Crimean companies to explore and produce oil, gas and mineral resources.

Investment in both Crimea and Sevastopol will be outlawed from Dec. 20 and EU companies will no longer be able to buy real estate or finance companies in Crimea, the European Council said in a statement on Thursday.

U.S. President Barack Obama also announced Friday that he would impose sanctions on individuals and companies operating in the area, saying, "The United States will not accept Russia's occupation and attempted annexation of Crimea."
Last Update: Dec 21, 2014 11:14 am
RELATED TOPICS