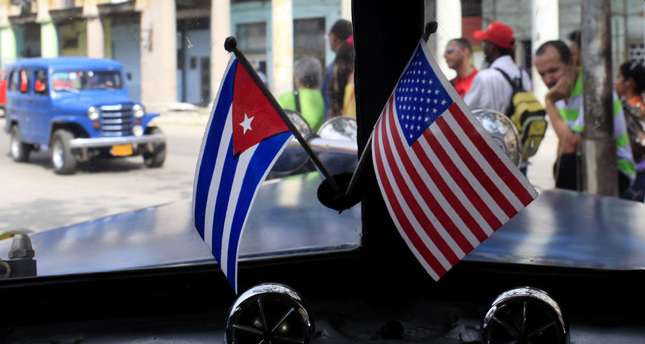 Republicans in Congress searched on Thursday for a strategy to sink or at least slow President Barack Obama's plan to normalize U.S. relations with Cuba, drawing a shrug from the White House. They floated ideas to fight the Democrat Obama's moves to forge ties and expand commercial ties with the communist-led island after half a century of hostility. Their ideas included denying funds to reopen a Havana embassy and blocking the confirmation of a U.S. ambassador. "We're going to look at all our options," Republican Senator Marco Rubio of Florida, a Cuban-American who has led the charge against the thaw in relations, said at a Miami news conference without providing specifics. Many legal experts, and the White House, say Obama has broad executive powers to ease restrictions on commerce, transportation and banking, even if Congress objects. "The steps that the president announced are steps that are well within his executive authority as president of the United States," White House spokesman Josh Earnest told reporters, adding he was "not particularly" worried about Republican opposition. Earnest also said the White House would be willing to consider a possible precedent-shattering visit by Cuban President Raul Castro. On Wednesday, Earnest said Obama was open to a visit to Havana.

Fidel Castro, Raul's brother, was the last Cuban leader to visit the United States. He spoke to the Council on Foreign Relations in 1959 and in later years addressed the United Nations.

Mid-level U.S. diplomats visited Havana on occasion over the years while the countries cooperated on immigration, drug interdiction and oil-spill mitigation. Former U.S. President Jimmy Carter visited Havana in 2002 and 2011, long after he left office.

Earnest and U.S. Assistant Secretary of State for Western Hemisphere Affairs Roberta Jacobson, who is expected to visit Cuba in January, said renewed relations were not directly tied to progress on human rights in Cuba. "The president has had the leaders of both Burma and China to the United States," Earnest said. By meeting such leaders, the United States can better influence countries to respect universal human rights, he said. Legal experts say Congress could not block the opening of a U.S. Embassy, since the U.S. Constitution gives the president - not the legislature - authority over diplomatic relations. The United States has an Interests Section in the old U.S. Embassy building in Havana, and it would take little to adapt it. The Senate has left many other U.S. missions without ambassadors around the globe this year, as Republicans held up Obama's nominations.

Other options include writing funding restrictions into a budget bill or trying to pass standalone legislation seeking to preserve Cuba's isolation, such as a bill imposing more sanctions. Obama would almost certainly veto such legislation. The biggest obstacle to normal ties with Cuba is a decades-old embargo. With Republicans due to take control of both houses of Congress in January, chances are slim of lawmakers scrapping all sanctions on Cuba soon. Those sanctions are enshrined in law, most notably the Helms-Burton act passed in 1996.

Obama has called on Congress to repeal that law, although Republican leaders have said they will not allow any legislation to move in the House of Representatives that would ease the embargo. Kentucky Senator Mitch McConnell, who will be the Senate Majority Leader in the new Congress, has yet to comment on the restoration of Cuban-American ties.

For decades, Cuba's first response to criticism of poor economic performance was an obvious effect of a U.S. trade embargo that amounted to a blockade of the island nation by a bullying superpower. A legitimate act of self-defense against mercenaries working for the world's richest nation, which backed the failed Bay of Pigs invasion and plots to assassinate revolutionary leader Fidel Castro. Now, though, with Washington agreeing to restore full diplomatic ties that were cut in the early 1960s, Cuba's communist government may not be able to blame its old Cold War nemesis so readily. "The big bad wolf of Yankee imperialism is softening its teeth - so they won't have that ready-made scapegoat any more for things that are wrong on the island," said a Latin American diplomat who used to live in Cuba and still tracks events there. Cuba has repeatedly sought to dispel the idea that it secretly wanted the embargo in place, saying if the Americans believed that they should challenge Cuba by lifting it. With that now a greater possibility, however, there are risks.

Latin American countries and others that supported Cuba in its long battle against the United States may become less tolerant of its one-party rule, repression of dissidents and strict controls over the economy and the media if the U.S. threat disappears. "There wouldn't be any justification that we're in a state of war because the Americans are constantly attacking us. They won't be able to justify it, at least not to their friends," said Jose Daniel Ferrer, leader of the Cuban Patriotic Union (UNPACU), Cuba's largest dissident organization. U.S. President Barack Obama has made clear he expects improved human rights in Cuba as part of the deal to restore full relations. The U.S. government called it "a critical focus of our increased engagement."

The rapprochement announced on Wednesday included a prisoner swap -- U.S. citizen Alan Gross and a Cuban who spied for the United States were freed in exchange for three Cuban agents who were serving time in U.S. prison. A U.S. official said Cuba also released 53 people deemed by Washington to be political prisoners.

Still, the deal refocuses attention on Cuba's human rights record as its critics accuse Obama of giving up too much for the return of Gross, who the U.S. government insisted was innocent. Cuba has released most of its political prisoners, with Amnesty International putting the number in single digits and UNPACU saying it is between 90 and 100. Instead, the government detains dissidents for several hours or days at a time, as it did in public demonstrations at a busy Havana square on Dec. 10, rounding up dozens who responded to a call to protest by the opposition group Ladies in White.

President Raul Castro, 83, has pushed through market-style economic reforms since taking over from his ailing older brother Fidel in 2008. On the day he took office, he said Cubans should not use the embargo as an excuse for perennial shortages and economic hardship and he poked fun at the blame game in a 2010 appearance before parliament. But his reforms are slow-moving and he has said the wider goal is to strengthen Cuban socialism, not weaken it. So it was no surprise that even when announcing the U.S.-Cuban political breakthrough, simultaneously with President Barack Obama in separate speeches, Castro also reminded the world the sanctions were still in place. "This doesn't mean the main problem is resolved," he said. "The economic, commercial and financial blockade that causes our nation massive human and economic damage must stop."

Cuba estimates the sanctions have cost its economy about $117 billion in lost trade and extra costs, including nearly $4 billion in the most recent annual estimate. Critics say Cuba exaggerates the costs and has found commercial work-around with friendlier nations but the impact of not trading directly with the United States has been huge - from lost sales of sugar and other products to the inability to import cheap medicines.

Obama can significantly weaken the U.S. sanctions with executive authority and the White House has said it hopes the U.S. Congress will formally lift the embargo before Obama leaves office in January 2017. The United States and Cuba have accused each other of sabotaging previous efforts at closer ties but all signs indicate Cuba would welcome a controlled flow of U.S. investment, especially with its main foreign ally Venezuela suffering from economic disarray. Castro will almost certainly look to control the pace of economic change rather than allow a surge of U.S. influence into Cuba and opponents say they expect the government to find new reasons to justify tight communist control. "If they no longer have the excuse of the ferocious wolf, they'll always find others," said former Cuban dissident Ohalys Victore, who left the island in 2002 and now sells life insurance in Arizona.

As part of Obama's policy change, Washington is allowing U.S. telecoms providers to offer services in Cuba - a potential boost to the slowest internet in the Americas but perhaps not immediately welcome in a tightly-controlled society. "That potentially shifts the onus onto the Cuban government if they can't expand internet access," said Antoni Kapcia, a Cuba expert at Nottingham University in England, saying justification for internet under-development would be harder. "They may have lost that bit of an alibi," the expert added.