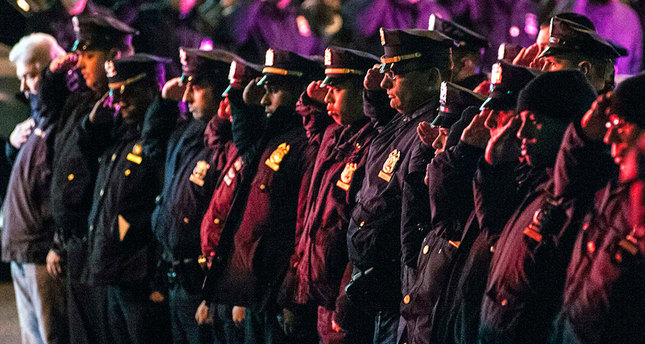 It's a few days before Christmas and 'tis not the season to be jolly in America.

New York Mayor Bill de Blasio said the city of 8.4 million was in mourning after two officers from the New York Police Department (NYPD) were shot on Saturday in broad daylight as they sat in their patrol car in Brooklyn.

"When a police officer is murdered, it tears at the foundation of our society. It is an attack on all of us," he said. "Our entire city was attacked by this heinous individual," he added.

The 28-year-old shooter, Ismaaiyl Brinsley, walked up to the passenger-side window of the car and opened fire at Wenjian Liu and Rafael Ramos. Liu, who was just married two months ago, and Ramos, who leaves behind a 13-year-old son, were "ambushed and murdered," said officials, as they were sitting in the front seats of a marked NYPD police car. Neither officer had a chance to respond before Brinsley opened fire, shooting several rounds into their heads and upper bodies. Officials say they may not have noticed him approaching. Brinsley then fled to a near subway station where he turned the gun to himself, taking away a third life in New York that afternoon. He died from a gunshot wound to the head.

"Today, two of New York's finest were shot and killed with no warning, no provocation," NYPD Police Commissioner William Bratton told a news conference after the attack. "They were quite simply assassinated." The officers were "targeted for their uniforms," said Bratton. The last NYPD officer that was fatally shot on duty was Peter J Figoski, who was killed in December 2011.

Though police is still investigating motives for the shooting, Bratton said Brinsley, had made "anti-police" comments online via social media, before killing the two officers. A message on an Instagram account, that appears to belong to Brinsley, read "They Take 1 of Ours ... Let's Take 2 of Theirs." Angered by the country's recent events, his post was followed with hash tags referencing the high profile cases of Eric Garner and Michael Brown. In July, Garner, an unarmed father of six, died after police held him in a chokehold while he was being arrested, a forbidden procedure in the police force. A month later, Michael Brown, an 18-year-old in the Ferguson Missouri, was shot dead by a police officer inspiring months of protests.

In both cases, the grand jury declined to indict the white police officers for killing the unarmed men, causing an already angry crowd to continue their protests. Cases of white officers being acquitted of killing unarmed black men have been a recent trend in the U.S., leading activists and leaders to raise questions about police brutality, race equality and the grand jury process. After the deadly threats were made online, authorities in Baltimore sent a warning, but officials say that it was received in New York around the same time as the killings. The shooting comes at a time when police are being heavily criticized for their tactics, especially after a 12-year-old black boy from Cleveland was shot by police last month while he was playing with his toy gun at a playground, labeling him the youngest victim of the recent four high-profile deaths.

President Barack Obama condemned the killings, saying "two brave men won't be going home to their loved ones tonight." Attorney General, Eric Holder, denounced what he labeled an "unspeakable act of barbarism." "This cowardly attack underscores the dangers that are routinely faced by those who protect and serve their fellow citizens," Holder said. "As a nation we must not forget this as we discuss the events of the recent past. These courageous men and women routinely incur tremendous personal risks, and place their lives on the line each and every day, in order to preserve public safety. We are forever in their debt."

The Brown family condemned the latest killings as "senseless." "We reject any kind of violence directed toward members of law enforcement. It cannot be tolerated. We must work together to bring peace to our communities," they said in a statement.

Meanwhile, civil rights activist Rev. Al Sharpton, who is campaigning for police reform, said he also condemns the attacks. "I have spoken to the Garner family and we are outraged by the early reports of the police killed in Brooklyn today," said Sharpton. "Any use of the names of Eric Garner and Michael Brown, in connection with any violence or killing of police, is reprehensible and against the pursuit of justice in both cases."