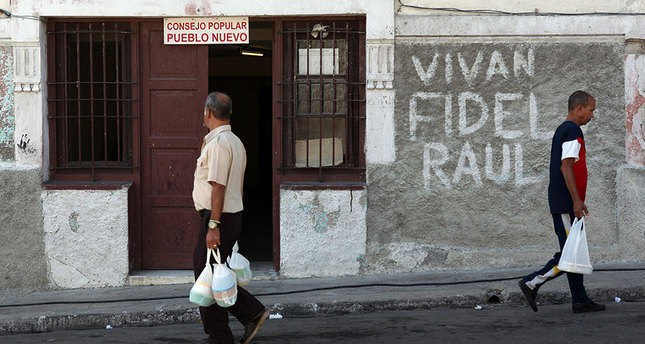 by Daily Sabah Dec 22, 2014 12:00 am
Following U.S. President Barack Obama's move to restore diplomatic relations with Cuba, Cuban President Raul Castro said that normalizing relations does not mean a change in Cuba's political system. "We can't pretend that by improving ties with the Unites States, Cuba will renounce the ideas for which it has fought for more than a century," the Cuban president said, but emphasized the importance of eliminating the economic, commercial and financial embargo imposed by the U.S. against the communist island nation since 1960.

Even though Castro reinforced that there will be no change in the political system, Obama considers the normalization of relations as "an important moment of change for the communist nation" and "a way to influence a new generation in Cuba." However, Cuban opposition leaders joined Cuban-American politicians and activists on Saturday to protest the Obama administration's policy on Cuba. "The opposition will continue fighting, with or without Barack Obama," said Cuban activist Jorge Luis Garcia Perez, as reported by AP.

The U.S. and its Cold War adversary, Cuba, agreed on Wednesday to normalize relations that have been severed for the last 50 years. The change in policy includes the opening of embassies in each other's countries within the coming months, a breakthrough prisoner exchange and easing of restrictions on commerce. Obama also pointed to further cooperation between the two countries in "health, migration, counter-terrorism, drug trafficking and disaster response." United Nations Secretary-General Ban Ki-moon hailed the Obama administration for its Cuba move. "I highly commend President Obama's very courageous visionary decision to address this issue. At the same time, I really appreciate President Raul Castro. He has shown great humanity and leadership this time," the U.N. chief said, as reported by Reuters. After the announcement of normalization process, Cuba's famous cigars producers are reportedly already at the door of the U.S. market, anxiously awaiting for it to open-up.

Relations between the U.S. and Cuba have been frozen since the 1959 revolution that brought former President Fidel Castro to power. Washington broke diplomatic relations with Havana in 1961, as Cuba started to build close relations with the Soviet Union. Hostilities increased with the Cuban missile crisis in October 1962 that triggered a crisis between the Soviet Union and the U.S. Since then, the U.S. has imposed harsh sanctions on Cuba up until Obama was elected president in 2008. During the Obama administration, the two countries began to cooperate and improve diplomatic relations.