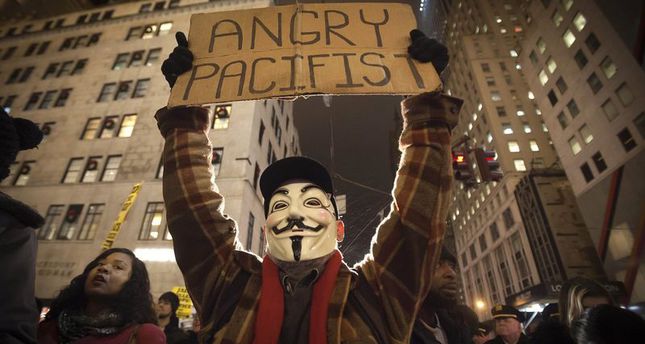 The national outrage over police violence in the United States continues as thousands of protestors took to the streets of New York City on Tuesday night to protest the excessive use of force by police officers. The tension was heightened after Saturday's murder of two New York police officers; Wenjian Liu and Rafael Ramos.

New York City Mayor Bill De Blasio led a moment of silence at the City Hall in the afternoon three days after the attack on the officers before asking his staff to hug those nearby "as a symbol of our belief that we will move forward together," Reuters reported.

De Blasio has been widely criticized by the city's largest police union, The Patrolmen's Benevolent Association, for not giving enough support to the police department. However, thousands of people have still sought justice for the black community.

The protests intensified following the death of an unarmed 43-year-old black man, Eric Garner. "No justice, no peace, no racist police," screamed protestors after a grand jury acquitted the police officer who killed Garner. Garner, who suffered from asthma, was chocked by police on July 17 earlier this year in Staten Island.

A frequently shown video shot by a bystander, shows the excessive force used by police as Garner was choked to death on the sidewalk and three other officers helped suppress him. "I can't breathe," he repeatedly says in the video - a quote that was painted on signs and posters carried at rallies across the country.

The consequent events caused a spark in the national conversation about police training, race equality and the process of the grand jury. The constant policing of black communities has caused police in the U.S. to lose the trust of minority groups.