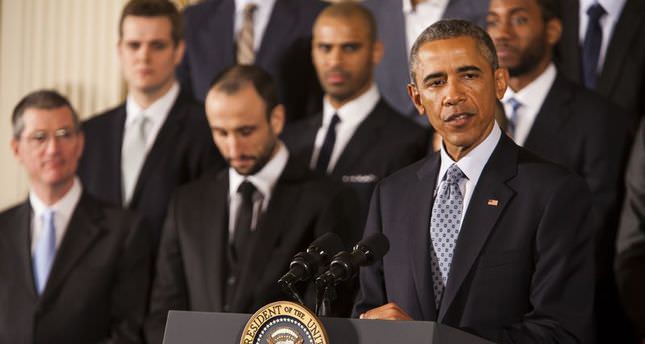 by Anadolu Agency Jan 13, 2015 12:00 am
President Barack Obama met with congressional leaders on Tuesday to urge bipartisan support on a range of issues including cybersecurity, trade and taxes.

It was the first such meeting since the both houses of Congress fell to Republicans during the midterm congressional elections in November 2014.

"I've got a State of the Union next week, one of the things we're going to be talking about is cybersecurity," he said.

"With the Sony attack that took place, with the Twitter account that was hacked by Islamist jihadist sympathizers yesterday, it just goes to show much more work we need to do both public and private sector to strengthen our cyber security."

Obama said that he, Boehner and McConnell have agreed on cybersecurity.

"I think we agreed that this is an area where we can work hard together, get some legislation done and make sure that we are much more effective in protecting the American people from these kinds of cyberattacks."

Obama acknowledged "disagreements" between the White House and the Republicans-led Congress but he said that there are areas of cooperation.

The president said that there's an opportunity to work together on trade and taxes by "simplifying the tax system and making sure everybody's paying their fair share." He said it was a chance to "streamline government."

Obama asked Congress last week to give him more power to streamline and reorganize the federal government, in ways such as merging agencies that perform similar functions.

Congress would be required to a vote on the plan within 90 days of its submission.

On the jobs front, "progress" must be maintained after the latest jobs report showed the unemployment rate fell to 5.6 percent in December, according to Obama. It is an indication that "the recovery continues to move in a robust fashion," he said.

"We're in a position to make sure that 2015 is an even stronger year, and relative to our competitors, we are holding much better cards. The key now is for us to work as a team to build on this progress," he said.
Last Update: Jan 14, 2015 4:29 pm
RELATED TOPICS