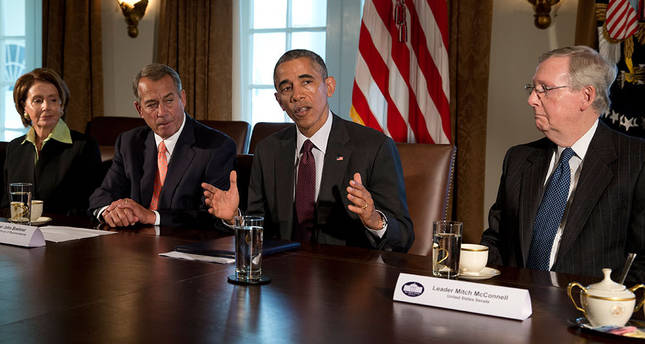 by Associated Press Jan 18, 2015 12:00 am
U.S. President Barack Obama will call for increasing taxes on the wealthiest Americans by raising the capital gains rate and eliminating a tax break on inheritances, then using the revenue to fund new tax credits and other cost-saving measures for the middle class. The president's proposals are likely to be cheered by the Democratic Party's liberal base, but the tax increases are all but certain to be non-starters with the new Republican majority on Capitol Hill. Obama will announce the tax proposals Tuesday night in his State of the Union address. Senior administration officials disclosed details Saturday on the condition of anonymity because they were not authorized to discuss the proposals by name ahead of the president. The president's address — his first to a Republican-led Congress — will also include calls for lawmakers to make community college free for many students, increase paid leave for workers and enact broad cybersecurity rules.

The centerpiece of the president's tax proposal is an increase in the capital gains rate on couples making more than $500,000 per year to 28 percent, the same level as under President Ronald Reagan. The top capital gains rate has already been raised from 15 percent to 23.8 percent during Obama's presidency. Obama also wants to close what the administration is calling the "Trust Fund Loophole," a change that would require estates to pay capital gains taxes on securities at the time they're inherited. Officials said the overwhelming impact of the change would be on the top 1 percent of income earners. While GOP leaders have said they share Obama's desire to reform the nation's complicated tax code, the party has long been opposed to many of the proposals the president will outline Tuesday. For example, most Republicans want to lower or eliminate the capital gains tax and similarly want to end taxes on estates, not expand them. "More Washington tax hikes and spending is the same, old top-down approach we've come to expect from President Obama that hasn't worked," a spokesman for House Speaker John Boehner, Michael Steel, said in a statement Saturday night. "Republicans are offering better solutions focused on helping small businesses grow and hire, and helping families improve their lives."

Administration officials pointed to a third proposal from the president as one they hope Republicans would support: a fee on the roughly 100 U.S. financial firms with assets of more than $50 billion. Officials said the fee is similar to a proposal from former Republican Rep. Dave Camp of Michigan, who led the tax-writing Ways and Means Committee. Camp's plan, however, was part of a larger proposal to lower the overall corporate income tax rate. Raising the capital gains rate, ending the inheritance loophole and tacking a fee on financial firms would generate $320 billion in revenue over a decade, according to administration estimates. Obama wants to put the bulk of that money into a series of measures aimed at helping middle-class Americans.

Obama's call for higher taxes on the wealthy could further antagonize Republicans who are already angry with the president over his vows to veto several of the party's priorities, including legislation to approve construction of the Keystone XL oil pipeline, make changes to the president's signature health care legislation and block his executive actions on immigration. "Slapping American small businesses, savers and investors with more tax hikes only negates the benefits of the tax policies that have been successful in helping to expand the economy, promote savings and create jobs," Sen. Orrin Hatch, R-Utah, the chairman of the Finance Committee, said in a statement. "The president needs to stop listening to his liberal allies who want to raise taxes at all costs and start working with Congress to fix our broken tax code." Even before officials revealed Obama's tax proposals, Republicans were saying that his veto threats are a sign of a president who didn't get the message from voters who relegated his party to minority status in the November election. New Senate Majority Leader Mitch McConnell, R-Ky., said the president still has a chance to change his tone. "Tuesday can be a new day," McConnell said Friday. "This can be the moment the president pivots to a positive posture. This can be a day when he promotes serious realistic reforms that focus on economic growth and don't just spend more money we don't have. We're eager for him to do so."