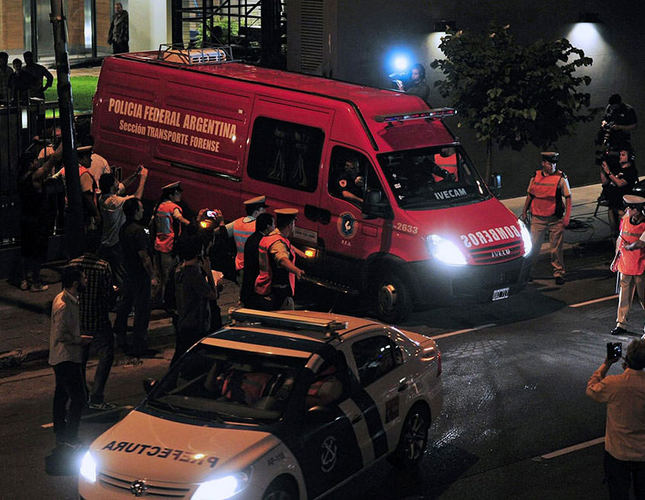 by Jan 19, 2015 12:00 am
An Argentine prosecutor, who has been found dead just hours before giving what was expected to be damning testimony against President Cristina Kirchner, appears to have committed suicide, the nation's top security official said Monday.

"All signs point to suicide," said Argentine Security Secretary Sergio Berni following the death of Alberto Nisman, 51, whose body was found overnight in his apartment in the trendy Puerto Madero neighborhood of the capital.

Nisman, who accused President Cristina Kirchner of obstructing a probe into a 1994 Jewish center bombing, was found dead of a gunshot wound just hours before he was due to testify at a congressional hearing.

Officials said a .22-caliber handgun was found beside his body, which was found by his mother in the bathroom of his 13th floor apartment after his security detail was unable to contact him.

Nisman since 2004 had been investigating the 1994 van bombing of the building of the Argentine Jewish Charities Federation, or AMIA.

The bombing left 85 people dead and 300 others injured in the worst attack of its kind in the South American country.

Nisman had last week asked for an investigation into possible obstruction by Kirchner and was due to speak at a congressional hearing on Monday to provide evidence of his assertions.

He was also expected to accuse her foreign minister Hector Timerman.

The prosecutor has accused Iran of being behind the attack and said Kirchner hampered the enquiry to curry favor with the Islamic republic.

The government has categorically denied the accusations.

Nisman had also accused former president Carlos Menem (1989-'99) of helping obstruct an investigation into the bombing, which has never been solved.

Argentina charges that Hezbollah, the Lebanese Shiite movement, carried out the attack under orders from Iran, which Tehran denies.

Nisman had said he had phone recordings that show the Kirchner government and Argentine authorities had bowed to Iranian demands after the Islamic republic dangled lucrative commercial contracts.

Nisman was supposed to present proof of his allegations that Kirchner and Foreign Minister Hector Timerman had a "plan of impunity" to "protect the Iranian fugitives."

In addition to his complaint, Nisman had ordered the freezing of assets worth some $23 million of Kirchner, Timerman and other officials.

Jewish community members had cautiously welcomed Nisman's complaint, but also requested he make public evidence to back up his assertions.

Opposition lawmaker Patricia Bullrich said she was shocked by Nisman's death, calling it "a grave affront to the country's institutions."

Bullrich said she'd spoken to Nisman on the phone on Saturday on three occasions and he said that he had received several threats.

In 2013, Argentina's Congress approved, at the request of the executive branch, an agreement with Tehran to form a truth commission to investigate the bombing, consisting of five members from neither Argentina nor Iran.

It also authorized an Argentine judge to travel to Iran to question the former officials accused of involvement.

The Jewish center bombing came two years after an attack against the Israeli embassy in Buenos Aires that killed 29 people.

In January 2014, Argentina accused Israel of concealing information about the attacks after a former Israeli ambassador to Argentina suggested that those responsible had been killed by Israeli security forces.

Argentina's Jewish population of about 300,000 people is the largest in Latin America.