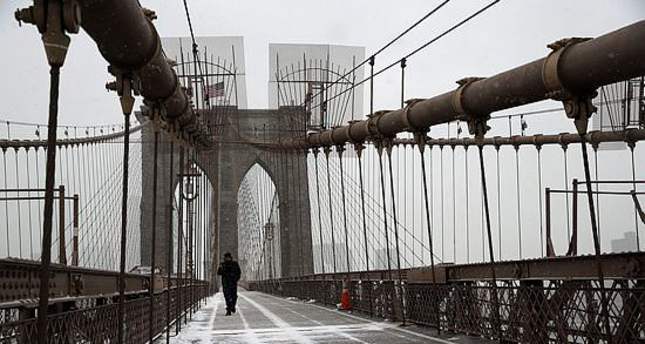 A huge snowstorm slammed into northeastern US late Monday, shutting down public transport, cancelling thousands of flights and leaving roads and streets deserted as snow blanketed an area that's home to tens of millions of people.

Authorities ordered drivers off the streets in New York and other cities like Boston in the face of a storm that forecasters warned could reach historic proportions, dumping up to three feet (up to a meter) of snow in some areas.

New York Mayor Bill de Blasio said it would be "most likely to be one of the largest blizzards in the history of New York City."

More than 7,100 flights were cancelled on Monday and Tuesday, as Manhattan was abandoned by panicked commuters rushing home early, leaving behind eerily quiet snowy streets.

"It could be a matter of life and death, and that's not being overly dramatic, so caution is required," New York state Governor Andrew Cuomo warned.

CNN broadcast footage of New York's Times Square empty but for snow plows and the odd pedestrian. Up and down the city's broad avenues, traffic lights were red, one after another.

In New York City, the subway last closed for Hurricane Sandy in 2012, which killed more than 200 people and caused months-long power cuts.

With New England expected to be the worst affected by the "nor-easter," public transit was also shut in Boston, as authorities implored residents used to winter storms to stay off the roads.

"Whiteout conditions and treacherous roads will make driving anywhere extremely dangerous," Massachusetts governor Charlie Baker said as he declared a state of emergency at mid-day. "I can't stress this part enough: Please stay off the roads."

States of emergency were declared in states across the affected region as residents rushed to supermarkets to stockpile food.

"I have nothing to eat, I need some food. Who knows if tomorrow I'm going to leave my house," said boutique worker Rosa Ramirez, queuing outside an upmarket Whole Foods store in Manhattan.

"What I do not know is how long I'll have to wait," she said, as snow and icy wind gusted through the queue of shoppers.

New York's famed Broadway and top music venues -- including Carnegie Hall and the Metropolitan Opera -- shelved performances. NBA games were also postponed.The worst snow was expected to fall overnight, which combined with winds of up to 70 miles (112 kilometers) an hour will paralyze swaths of the coast.

As well as blizzard warnings, flood warnings are also in effect, with officials warning against power outages and falling trees.

Cuomo called out several hundred National Guard for New York and Long Island, which juts out into the Atlantic.

At 11pm he announced the travel ban on all roads in 13 counties had become into effect and that the city's MTA public transit had been suspended until further notice.

Those caught out on the roads after the cut-off point would be liable for fines, Cuomo said.

"Recognize this as an emergency," de Blasio cautioned. "You can't underestimate this storm. It's not a typical storm, its going to pack a real punch."

Schools will be closed on Tuesday and scheduled examinations cancelled.

The United Nations closed its headquarters early and was to remain shut, forcing the cancellation on Tuesday of an important event to commemorate the 70th anniversary of the Holocaust.

Meteorologists said the storm would bring crippling conditions and warned that 28 million people were in the possible blizzard zone.