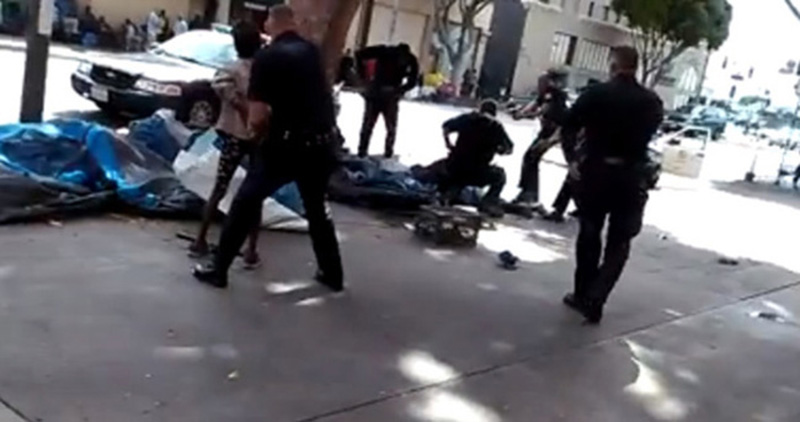 by Daily Sabah with Reuters Mar 02, 2015 12:00 am
A video posted on Facebook shows Los Angeles police shooting a homeless man during a confrontation which took place on Sunday.

The video has attracted great attention across social media and had been viewed 4.3 million times within the first 12 hours that it was posted.

It shows several uniformed officers scuffling with the man on Skid Row, an area in the city where homeless people mostly live. Once on the ground, the man continues struggling, at which point several shots are fired.The homeless man in the video was reportedly declared dead at a hospital shortly after being shot.

Soboroff also said the question of whether the man had tried to take an officer's gun was a critical matter in the shooting as it would be the only explanation for the shooting.

Soboroff said the LAPD, its independent inspector general and the district attorney's office would all investigate the shooting "very, very carefully," the newspaper reported.

The man has not yet been identified. A series of civilian deaths by the police in the past year has become a touchstone in the United States, especially in Ferguson, Missouri, where an unarmed teenager was shot and killed by a police officer, triggering weeks of protests.
Last Update: Mar 02, 2015 6:44 pm
RELATED TOPICS