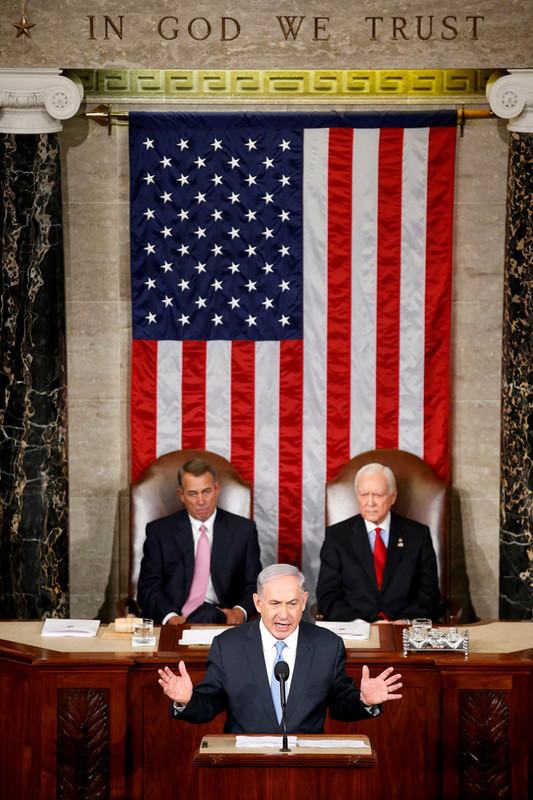 by Daily Sabah with Agencies Mar 03, 2015 12:00 am
Israeli Prime Minister Netanyahu opened his speech to U.S. Congress on Tuesday opposing President Obama's stance on the nuclear deal with Iran and said, "We insist that restrictions on Iran's nuclear program not be lifted until Iran stops is aggression against its neighbors and the world."

The PM said to congress, it was 'never my intention,' to make address political. Netanyahu continued to say, "When it comes to Iran and ISIS, the enemy of your enemy, is your enemy."

In an impassioned address to the U.S. Congress, conducted even as Secretary of State John Kerry was in talks in Switzerland with his Iranian counterpart, Netanyahu branded Iran a global threat.

"That deal will not prevent Iran from developing nuclear weapons," he said, placing himself in stark opposition to US President Barack Obama's policy of containing Iranian ambitions through a diplomatic accord.

"It would all but guarantee that Iran gets those weapons, lots of them," he said.

"Because Iran's nuclear program would be left largely intact, Iran's breakout time would be very short."

Around 50 Democratic members stayed away from the event, but many more lawmakers from both sides of the aisle did attend, and Netanyahu was welcomed with a standing ovation.

"I know that my speech has been the subject of much controversy. I deeply regret that some perceive my being here as political," he said.
"That was never my intention. You want to thank you, Democrats and Republicans, for your common support for Israel year after year, decade after decade."

"We appreciate all that President Obama has done for Israel," he insisted, citing the close security cooperation between the countries.