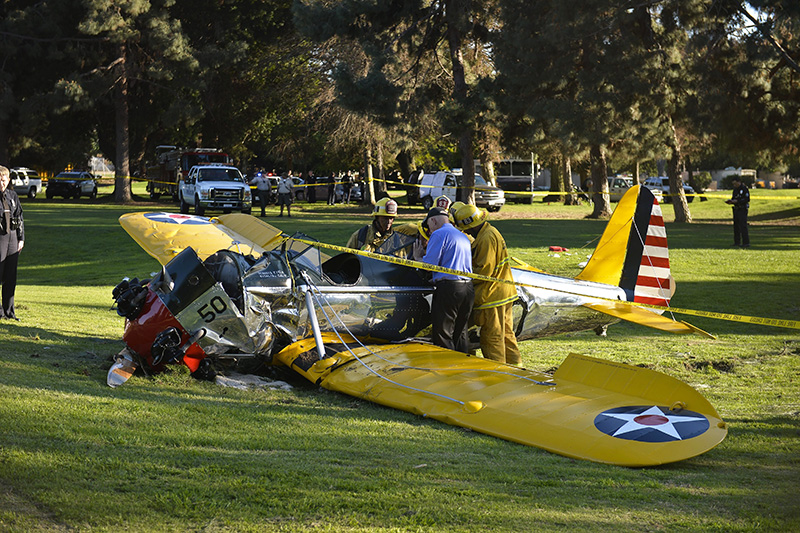 by Associated Press Mar 06, 2015 12:00 am
Harrison Ford crash-landed his World War II-era airplane after losing engine power, suffering serious but not life-threatening injuries as he used his years of piloting prowess to bring down the plane on a golf course and avoid nearby homes in what one expert called a beautifully executed maneuver.

It was the latest and most serious in a series of crashes and close calls for the 72-year-old action-adventure A-lister, who like his "Star Wars" alter-ego Han Solo has a taste for aerial thrills. He was pulled Thursday from the plane by golfers and course workers who saw it come down about a quarter-mile short of the runway at Santa Monica Municipal Airport and taken by ambulance to a hospital conscious and breathing.

He was pulled from the plane and given initial help by doctors who happened to be playing golf on the course that is right next to Santa Monica Municipal Airport, Los Angeles fire officials said. He was then taken by ambulance to a hospital in a condition described as fair-to-moderate.

Ford's publicist Ina Treciokas said in a statement that Ford had no other choice but to make an emergency landing. She said his injuries "are not life threatening, and he is expected to make a full recovery."

Ford took off from the airport at 2 p.m. (2200 GMT) About 20 minutes later, he told the tower he had engine failure and was making an immediate return, according to a recording posted by the website LiveATC.net.

The plane had been flying at about 3,000 feet (914 meters) and hit a tree on the way down, according to witnesses and officials.

The plane, a yellow 1942 Ryan Aeronautical ST3KR with stars on its wings, was upright and mostly intact after the crash. No one on the ground was hurt.

"I would say that this is an absolutely beautifully executed what we would call a forced or emergency landing, by an unbelievably well-trained pilot," said Christian Fry of the Santa Monica Airport Association.

Charlie Thomson, a flight instructor at the airport who saw Ford take off, said engine failure like Ford's does not make the plane harder to maneuver. "It just means you have to go down," he said.

Ford had a cut to his forehead and scraped arms, but it wasn't clear what internal injuries he may have had, Los Angeles Assistant Fire Chief Patrick Butler said. "He wasn't a bloody mess. He was alert. He had good vitals," Butler said.

The bystanders pulled him from the plane because they were afraid it might explode or catch fire, Butler said.

The airport's single runway sits amid residential neighborhoods in the city of more than 90,000 on the Pacific Ocean. City leaders and many residents advocate closing the airport, citing noise and safety concerns. Other airplanes taking off or landing there have crashed into homes, and in September 2013 four people died when their small jet veered into a hangar and caught fire.

Eddie Aguglia, 47, was golfing on the eighth hole at the course. He said he looked up and saw the vintage plane with "U.S. Army" on its underside.

"The engine gave a little sputter" and died, he said.

Jeff Kuprycz, another golfer, said the plane "banked sharply to the left" then went down. "There was no explosion or anything. It just sounded like a car hitting the ground or a tree or something," Kuprycz said.

Ford is cast to play the swashbuckling Solo in his fourth "Star Wars" movie, set for release in December. The original "Star Wars" in 1977 made Ford an overnight star who later played whip-slinging archaeologist Indiana Jones in four hugely popular movies.

Shooting on "Star Wars: The Force Awakens" was shut down for several weeks last July after Ford broke his leg during filming at the Pinewood Studios outside London. The accident involved the spacecraft door of the Millennium Falcon, which makes a return in the highly anticipated film.

Ford got his pilot's license in the 1990s and has made headlines with his flying before, though he had never been significantly injured doing it. In 2001, he rescued a missing Boy Scout with his helicopter. Nearly a year before, he rescued an ailing mountain climber in Jackson, Wyoming.

In 2000 in Lincoln, Nebraska, a gust of wind sent a six-seat plane Ford was piloting off the runway. He and his passenger were not injured.

The National Transportation Safety Board will investigate the crash in a process that could take up to a year before a final report. NTSB investigator Patrick Jones said "we're going to look at everything: weather, man, the machine."
Last Update: Mar 06, 2015 10:44 am
RELATED TOPICS