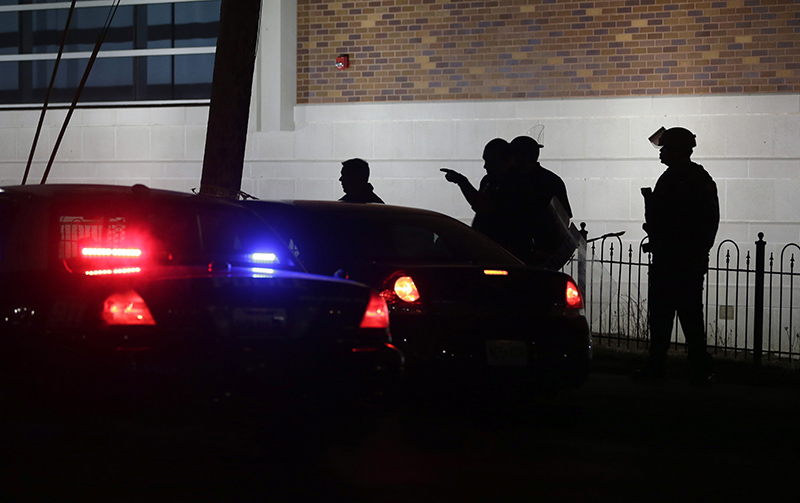 After the Ferguson shooting case was closed with a report revealing rampant racism among local forces that systematically targeted black Americans, protests have still continued. Two police officers were shot in front of the Ferguson Police Department early Thursday. Demonstrators gathered after the resignation of the police chief in the Missouri city that became a symbol of racial tensions following a white officer's fatal shooting of an unarmed black 18-year-old.

A 32-year-old officer was shot in the face and a 41-year-old officer was shot in the shoulder, St. Louis County Police Chief Jon Belmar said at a news conference. Both were taken to a hospital, where Belmar said they were conscious, but he described their injuries as "serious."
"I don't know who did the shooting, to be honest with you," Belmar said, adding that he could not provide a description of the suspect or gun. He said his "assumption" was that, based on where the officers were standing and the trajectory of the bullets, "these shots were directed exactly at my officers."

Several high-profile deaths of unarmed men and teens by police officers have stirred nationwide calls for greater police accountability.
Protesters in the Atlanta area added their voices to the chorus Wednesday after an unarmed, naked black man was fatally shot by an officer responding to a complaint of a suspicious person at an apartment complex.

After the Ferguson shooting, officers with guns and in riot gear circled the station, and more than a dozen squad cars blocked the street.
The shots were fired hours after Ferguson's mayor announced the resignation of Police Chief Thomas Jackson, the latest city official to quit in the wake of a scathing federal government report alleging bias within the police department and court system. Before the shooting, some at the protest were chanting to show they weren't satisfied with the resignations of Jackson and City Manager John Shaw earlier in the week, the St. Louis Post-Dispatch reported.

Mayor James Knowles III announced Wednesday that the city had reached a mutual separation agreement with Jackson that will pay Jackson one year of his nearly $96,000 annual salary and health coverage. Jackson's resignation becomes effective March 19.

Jackson had previously resisted calls by protesters and some of Missouri's top elected leaders to step down over his handling of Brown's shooting and the weeks of protests that followed. He was widely criticized from the outset, both for an aggressive police response to protesters and for his agency's erratic and infrequent releases of key information.

During a 12-minute news conference, Knowles said Jackson resigned after "a lot of soul-searching" about how the community could heal from the racial unrest stemming from the fatal shooting last summer. "The chief is the kind of honorable man you don't have to go to," Knowles said. "He comes to you when he knows that this is something we have to seriously discuss."

The excessive use of force and civil rights violations by the U.S. police in the case of the Ferguson shooting was revealed in a report issued by the U.S. Department of Justice saying that blacks in Ferguson are disproportionately subject to excessive police force.

After the long criminal inquiry into the police shooting of Michael Brown, the Justice Department cleared the police officer in Ferguson case. The grand jury had decided on Nov. 24 not to indict the white police officer, Darren Wilson in the death of Michael Brown. With many people disappointed with the jury's decision, public anger in the U.S. has led to violence, and has spread not only in other U.S. cities but received worldwide attention.

Brown's death reignited a national debate over race in America and sparked protests across the country. The Midwestern town of Ferguson was hit by violent unrest following the fatal police shooting of Michael Brown on Aug. 9. In an effort to draw attention to police brutality toward the black community, hundreds of thousands have taken to the streets in protest. Many have called for the reform of police practices, especially toward black American citizens, a new police chief in Ferguson and a national law to prevent racial profiling by police during protests.