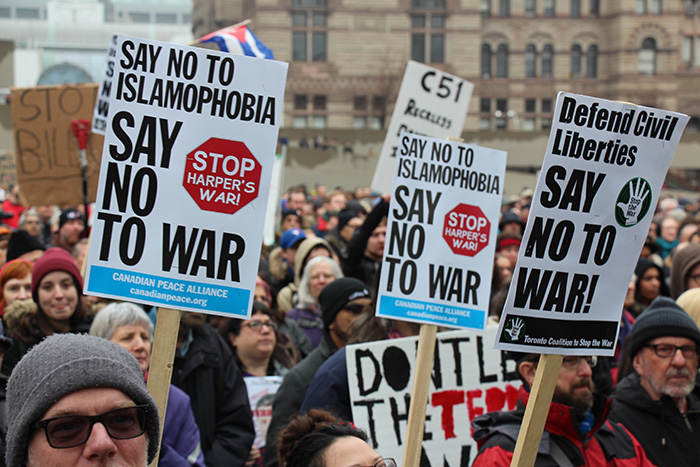 |Photo: AA
by Mehmet Çelik Mar 16, 2015 12:00 am
Thousands of Canadians have protested against Canada's new proposed anti-terrorism legislation in a demonstration called National Day of Action against Bill C-51, by gathering in public squares across the country on Saturday.

The Conservative government, led by Canada's Prime Minister, Stephen Harper, introduced the legislation, known as Bill C-51, in January, which would expand the powers of the Canadian police and country's intelligence agency, Canadian Security Intelligence Service, (CSIS) by allowing police to detain terror suspects. The country's spy agency would also have new powers in their terror related investigations.

Critiques of the bill have protested the proposed legislation, arguing that it would infringe upon Canadians' civil liberties and right to privacy, especially in their online activities.

"It's not dissimilar to what we see with the president of Russia, who uses a minority there, the lesbian, gay, bisexual community ... and he goes after them with great relish because he knows that it's going to resonate with a part of the population," Mulcair said on Friday, comparing Harper to Putin, according to Reuters.

Canada's opposition and rights groups have criticized Harper's approach to Islam, arguing that his hardliner stance damages the values of Canadians across the country, who celebrate multiculturalism and coexistence.

Harper had recently commented on the niqab, a face-covering veil worn by some Muslims, after a women was denied taking her oath in a citizenship ceremony, because it was deemed to be "rooted in an anti-women culture". Harper argues that tougher security measures are necessary to be implemented agains the threat of 'terrorism'.