Multiple injuries in explosion and fire at New York building 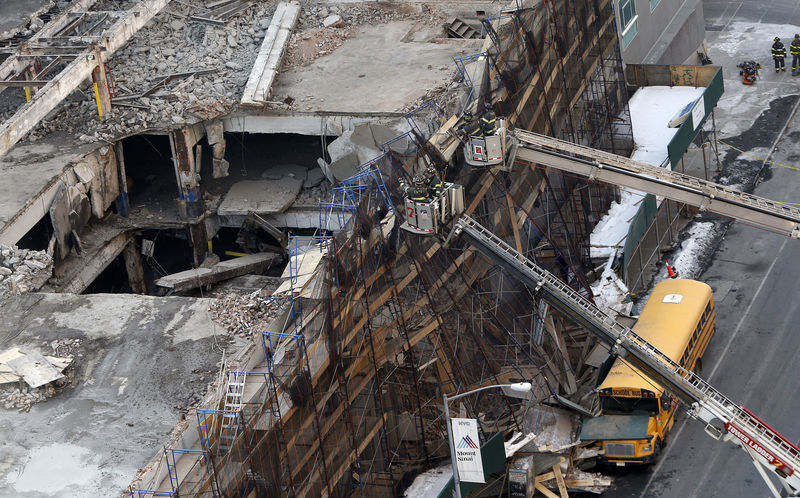 | Photo: AP
by Daily Sabah with AFP Mar 26, 2015 12:00 am
Twelve people were injured after a building collapsed and a large blaze tore through a neighboring property in New York's East Village on Thursday, authorities said.

Four of the injured were in a critical condition as a result of the emergency and more than 250 fire fighters were on the scene battling to control the raging flames, a spokeswoman told AFP.

The cause of the incident and how many people may have been inside the adjoining buildings at the time were not immediately clear.

Thick smoke filled the street and emergency workers shut down six blocks on Second Avenue, said an AFP reporter at the scene.

A gaping hole, where once a commercial and residential building stood, was engulfed in thick smoke and reduced to debris, showed a photograph posted on Twitter by the New York Fire Department.

Four people in a critical condition were rushed to hospitals.

"I was really scared," said 19-year-old Isaiah Barr, who lives several blocks away and was listening to music at home when he felt a boom.

The smell of burning was detected as far away as Midtown Manhattan, around 40 blocks farther north, and heavy smoke billowed high into the air.

Philip McElroy, a 23-year-old student, said he was visiting a friend two blocks away at the time.

"It was crazy loud. The windows were shaking. I ran over. There was a lot of smoke and part of the building was blown out."

Although the cause of the incident was not immediately clear, it is likely to revive safety fears, particularly in some of Manhattan's older multi-storey buildings.

Just over a year ago, eight people were killed when a gas explosion leveled two apartment buildings in Harlem in northern Manhattan on March 12, 2014.
Last Update: Mar 26, 2015 11:54 pm
RELATED TOPICS