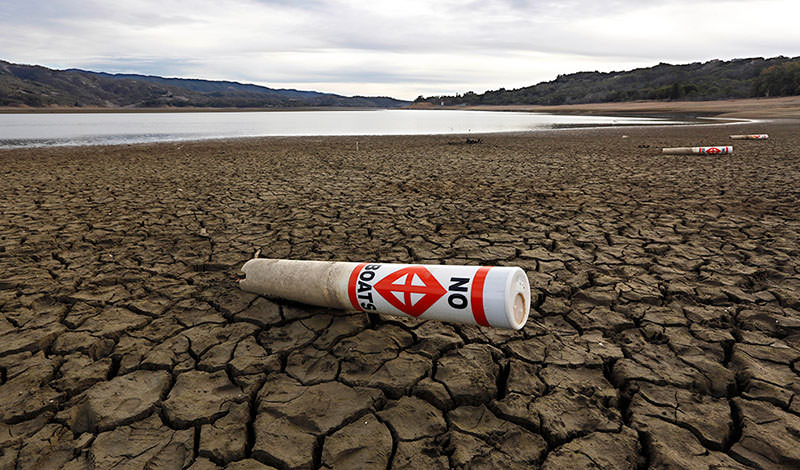 A warning buoy sits on the dry, cracked bed of Lake Mendocino near Ukiah, California | AP Photo
by Özge Bulur Apr 07, 2015 12:00 am
An executive order has been announced by Governor of California Edmund G. Brown Jr. last week for a 25 percent reduction in water use as part of urban water conservation requirements.

California is in its fourth year of drought with a record-low snowpack and rain, and officials of the state have issued a comprehensive water conservation plan. The curtailment of water use covers urban water conservation requirements and restrictions on outdoor irrigation. However, statewide problems are not just in urban centers but also in rural communities. And more significantly, the heart of the issue is not the amount of water used but the content of the water itself.

The snow in the mountains is at its lowest level for fours years. "We are standing on dried grass, and we should be standing in five feet of snow," Governor Jerry Brown said, speaking in the Sierra Nevada mountains.

Warning water right holders of nearly 40,000 water rights in the state about the drought, the Chair of the State Water Resources Control Board (State Water Board), Felicia Marcus, said "These are very difficult times, and everyone, urban and rural, will have to make sacrifices as we go through them. As we deal with an unprecedented drought, both urban and rural water users should anticipate we will continue to take unprecedented actions."

State voters had passed a $7.5 billion water bond last year, the most significant statewide investment in water supply in decades. Additionally, the state has committed over $870 million in drought relief since last year to communities who are victims of drought. However, the lack of access for more than a million people is not to water but to clean water. In some rural areas in particular, the water is polluted with arsenic, bacteria and other disinfection byproducts.

Contaminated water can cause thyroid problems, cancer or other serious health issues. Conner Everts, the facilitator for the Environmental Water Caucus, told a correspondent of RT (a Russian English-language news channel) that a lot of people are dependent on groundwater. Addressing those people who risk their lives as a result of using contaminated water, Everts said "They may not have access to … snowmelt water, which goes right by them and is delivered to 'Corporate Ag' or to Southern California. They are relying on ground water that is not only polluted with chemicals like [arsenic], but nitrates, which are clear and you can't tell when they are in the water."

A report by the United States Environmental Protection Agency (EPA or alternatively USEPA) also showed that the most common violations on water are nitrates and arsenic. While the first can cause serious illness including blue-baby syndrome in infants, and tend to come from fertilizer run-off, sewage leaks and erosion; the latter can cause skin damage, circulatory system problems and increased cancer risks.